The cost of equalising the HE experience 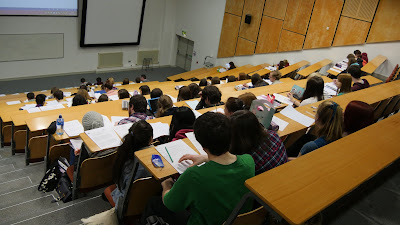 The main party manifestos have been the subject of intense scrutiny by the media this week. Costing of the various plans has been the subject of considerable criticism. It seems that many observers doubt that the increased spending will be possible without greatly increased borrowing. Add to this uncertainty about the economic impact of Brexit and the level of scepticism rises. Yet the UK spends much less on its citizens than many of its EU neighbours and the effects of austerity are now critical as services disintegrate. Amidst this, education should aim to stand on the foundation of equality of opportunity and fairness. This is particularly true of Higher Education if it is to feed improved social mobility.

One of the central assumptions of Higher Education must be that every student is afforded the same opportunity. At the core of this idea is the notion that family will support their children through university. Yet this is a wholly ‘middle-class’ assumption that fails to understand great variations in the family dynamic and the support available. Offering maintenance grants to students from low-income families is a good starting point. However, more needs to be done. Many families will not or, for some reason, cannot afford to support their children. Others are unable to go home and are left adrift in the system. This means that many are left to fend for themselves with an inadequate maintenance loan or spend hours per week diverting their precious study time into part-time work. Removing maintenance grants dealt a devastating blow to students under the most pressure. Yet there are many more struggling to find time to study effectively

Unfortunately, none of the manifestos acknowledge the simple principle that each student should be afforded the same opportunity to study. To do this, it would be necessary to make sure that all students have someplace acceptable to stay and have the same time available to complete their studies. However, nothing could be further from the truth. TEFS has highlighted that many students divert their time into commuting and part-time employment. TEFS analyses of data from the AdvanceHE / Higher Education Policy Institute (HEPI) Student Academic Experience Survey reports from 2012 to 2019 revealed that the pattern of term-time employment of students had not greatly altered since 2012 (see TEFS 19th July 2019 ‘Students working in term-time: Overall pattern across the UK’. The majority of students surveyed were not employed in term time and this fitted a general observation of employment data from the Office for National Statistics (ONS) quarterly employment data (see TEFS 27th July 2018 ‘The vast majority - one million - of students have no employment when in full-time studies’). A follow-up TEFS analysis of the same survey data revealed that students having to seek employment in term time are not necessarily confined to those from so-called ‘disadvantaged areas’ or from state schools. Those from more advantaged areas and backgrounds can also find themselves under financial pressure and working during term time (see TEFS 9th August 2019 ‘Students working in term-time: Challenging the ‘disadvantage’ shibboleth’). Perversely, many of those commuting longer distances to their place of study also carry a greater burden of time in part-time employment (see TEFS 23rd August 2019 ‘Students working in term-time: Commuter students and their working patterns’

What would it cost to equalise student study time?

A general assumption is that part-time employment in term time has no significant effect on studies as long as it is not above around 10 to 12 hours per week. This is not based upon strong evidence. Strangely, however, many universities set a recommended limit as high as 15 or 16 hours per week for their students. Many also offer the equivalent of an 'employment service' to local employers so they can more readily access student workers.

It is assumed here that the number of excess hours worked per week is anything above 10 hours per week. Using data from the Advance HE/HEPI student experience surveys (Student Academic Experience Survey) going back to 2012, Figure 1 illustrates the distribution of the number of hours that students report they are working per week during term-time. The percentages used to estimate the numbers involved in 2017/18 (using HESA total student number data from that year) were a mean calculated from survey date between 2012 and 2019. 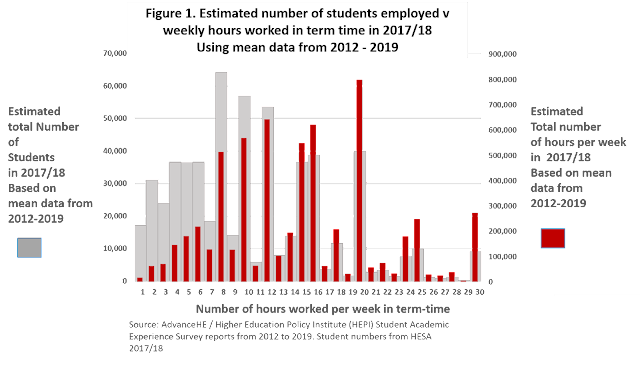 This gives an overview of the total hours worked per year across the whole student population in 2017/18.  Although the same survey shows that on average 66% of students do not have term-time employment, this still represents a considerable commitment from those that do. Using the current £9.30 per hour real living wage as a guide, the total cost of the excess employment hours that are financing those students comes to a staggering £1.18 billion per year.  It might be fair to deduce that families of students who did not work in term-time were subsidising their children to the tune of a total of around £2.3 billion per year over that time. The effect of student part-time employment on the local economy is considerable. Indeed, local businesses might rely on their input as an integral part of their business. However, it should be limited to protect the chances of those who are working excess hours.

Alleviating the excess working hours would be expensive and would probably require an extra input of around £1.3 billion per year into the funding system on top of existing hardship funds. This would be difficult to target since not all students under financial stress come from low-income families. There may be siblings using family resources or other pressures or commitments not always apparent. It would require universities to manage such additional financial support on the basis of assessments of need across a range of scenarios.

Can the country afford an expansion in government spending by the main contenders?

It seems that the aspirations, however grandiose or modest, have come in for severe criticism. Leading this has been a devastating analysis by the influential Institute for Fiscal Studies released yesterday (IFS General election 2019 manifesto analysis). Its considered view has three broad conclusions. The Conservative Party might have more modest spending plans, however, these will be constrained by a promise not to increase taxes. This is considered to be a signal that borrowing will rise considerably. The Labour party has very ambitious spending plans that are to be funded by taxation of the better off. However, there will be fallout on prices across the whole population. Again, borrowing will be the only way to plug the gaps. The Liberal Democrats are considered to be more prudent. However, their plans depend upon a bonus of income arising from not leaving the EU.

An exception is Ireland that spends a very low proportion of its GDP by comparison. Figure 3 shows spend per person in US$ (latest OECD data for 2014-2018) that offers a more tangible overview. Again, the UK spend is well down on its neighbours. But, by this measure, Ireland has a much greater spend per citizen than the UK. This anomaly is easily explained by the simple fact that Ireland currently has a GDP of US$ 81,686 per capita against the more modest US$ 47,042 per capita for the UK. The UK is falling behind many of its neighbours who spend more per person.

Despite this, the UK should be in a position to expand its spending from its low position currently. The questions must, therefore, be those of priorities. When considering equality of opportunity in Higher Education, it is important that every student gets an equal chance to study. That should be the underlying premise of any support offered and a priority at all levels of education if social mobility is to improve. It will be expensive to do, but the alternative is a grossly unfair system. The wider expansion of part-time degrees for those working part-time might be a way forward but only for those who wish this. Either way, the days of inflicting the pressure of full-time study on students who struggle to find the time should be relegated to the past.

Acknowledgements.
TEFS thanks Jonathan Neves and colleagues at Advance HE and HEPI for openly releasing the combined data from 2012 to 2019. Also ‘Youthsight’ for the large student panels that provided a solid platform for the surveys.
Mike Larkin, retired from Queen's University Belfast after 37 years teaching Microbiology, Biochemistry and Genetics.