Students working in term-time: Overall pattern across the UK 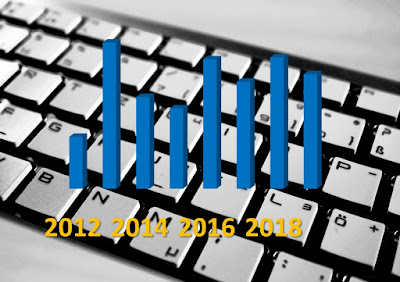 Analysis of the underlying data from the AdvanceHE / Higher Education Policy Institute (HEPI) Student Academic Experience Survey reports from 2012 to 2019 provides a valuable insight into the patterns of working by UK students during term time. It comes as no surprise that the majority of students do not work during the term. However, the minority that do work divert many hours away from studying. This is the first of a series of analyses of the data and looks initially at the overall pattern of hours worked across the various jurisdictions in the UK.

The AdvanceHE/HEPI reports on the Student Academic Experience surveys have for the last thirteen years provided the most valuable and comprehensive view of how students interact with the higher education provision across the whole of the UK. The survey involves a large number of students each year (14,072 in 2019) and covers a very wide range of questions. The foundation of the survey is the large panel of students provided through the organisation ‘Youthsight’. This makes it a powerful tool to look at trends and patterns.


How many students are in paid employment in term time?


One question, “In an average week during term-time, roughly how many hours have you spent in paid employment unrelated to your course?” has appeared in every survey since 2012.


In terms of having equal time to study, TEFS has looked at the extent of this as a problem for some students across the UK. TEFS has commented previously on its observation that a large number of students do not appear to be employed during the term. This was initially based upon employment data from the Office for National Statistics (ONS) quarterly employment data (see TEFS 27th July 2018 ‘The vast majority - one million - of students have no employment when in full-time studies’). It comes as little surprise that there is a marked cyclical pattern of numbers in employment throughout the year. A sharp increase in numbers employed occurs to coincide with the vacations.

The Student Academic Experience survey data provides the best way to examine what is happening specifically within term times. Firstly, it can be seen in Figure 1A that the majority are not employed. But, surprisingly, this pattern has not changed much since 2012. However, there is a small, but worrying trend towards more students in employment since 2014. Currently, at 36%, it has risen from 31% back in 2012 (see *Footnote below).

What is the distribution of hours worked per week?

Figure 1B shows the average number of hours in employment per week by those that say they are working. Again there is a surprise that the mean has not changed much over the years. Yet this might hide shifts in hours worked that a distribution might reveal. 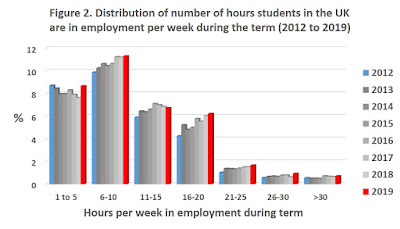 Indeed, this is the case and Figure 2 (see footnote) shows that there has been a gradual shift in the direction of longer working hours between 2012 (blue) and 2019 (red). Whilst many students still limit their working hours to below 10-12 hours, there are many who have extended their hours well beyond 15 and 20 hours per week. Those working 30 hours per week and over are in essence working full-time (see OECD).

What are the differences across the UK?

With different levels of support for students available across the UK in the different jurisdictions, it might be expected that this is reflected in the working pattern of the students. Indeed, this may be the case as Figure 3 illustrates. 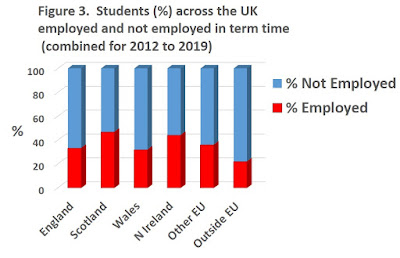 A greater proportion of students in Scotland (46%) and Northern Ireland (44%) are employed when compared to England (33%) and Wales (32%). This may well reflect the levels of support available for students from both jurisdictions where there is less available in comparison to England in a combination of grants and loans. However, it does not account for all of the variation. This is a marked difference and it is of interest to see also the range of hours worked by these students.

Figure 4 describes a more detailed picture of the situation. 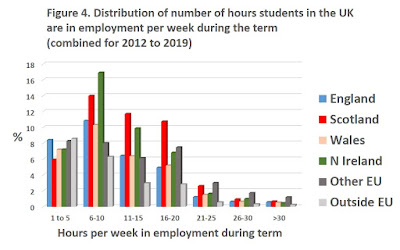 It shows that a significantly greater number of students in Scotland and Northern Ireland work between 6 and 20 hours per week when compared to those in England (P<0.01).


What factors determine the need to seek paid employment during term time?

This is a tougher question to answer. However, the underlying assumption is that  lack of finance is the main cause. Students from less well-off backgrounds might be expected to seek work to make up any deficit in their funding. However, in England at least, they might expect access to a full loan of up to £8,944 (outside London) for maintenance support. But this is means-tested and tails off to £4,168 for those from the more well-off families. If there is no or little family support, they are left with no choice. The distribution of the number of hours worked might well reflect the size of a student’s income versus costs. A survey of 846 parents was reported earlier this week by Which (also reported in the Guardian). It concluded that many parents were taking some drastic actions to support their children at university. They were sacrificing holidays and taking on second jobs to cover the cost of university. Those with more children are under even more financial pressure. Which has a very accessible student budget calculator that provides insight into the decisions that many students need to make. The government also has its own financial calculator.

It seems that many families underestimate what the cost turns out to be. Some of this is based upon having too optimistic a view about what is possible. With A-level and Higher results on the horizon, this summer there will be the same excitement as ever. In my experience over 36 years of teaching first-year students at University, I found the excitement and optimism of the students to be infectious and uplifting at this time. However, for too many their optimism is later dashed onto the rocks of financial worries and time pressure. That this also stifles talent has been a real concern for me. Finding out more about this aspect of the student experience is imperative and therefore expect more updates from TEFS.

*Footnote: The data varies slightly from the AdvanceHE/HEPI reports where the percentages are marginally higher. This is because some individual student returns were discounted. Note that 298 students declared that they worked over 50 hours per week and 93 of these noted it was over 100 hours. These were discounted from the analyses shown here.