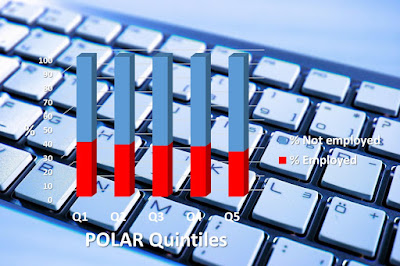 It is generally assumed that students under the most financial pressure have less family support and come from disadvantaged areas and state schools. This means that they may need to seek employment during term time when in Higher Education. However, this may not be universally the case as a combination of loans, grants and bursaries across the UK can offset many problems. But those from more advantaged areas and backgrounds can also find themselves under financial pressure. Their families may have little to spare or refuse to assist their children into adulthood when at university. They are above the threshold for support in loans or grants. Such students are caught in the middle of a ‘disadvantage’ trap that affects their lives despite being labelled as ‘advantaged’. The shibboleth of ‘disadvantage’ should be addressed in seeking equal opportunities for all students.

A recent TEFS analysis of data from the AdvanceHE / Higher Education Policy Institute (HEPI) Student Academic Experience Survey reports from 2012 to 2019 revealed that the pattern of term time employment of students had not greatly altered since 2012 (see TEFS 19th July 2019 ‘Students working in term-time: Overall pattern across the UK’. The majority of students surveyed were not employed in term time and this fitted a general observation of employment data from the Office for National Statistics (ONS) quarterly employment data (see TEFS 27th July 2018 ‘The vast majority - one million - of students have no employment when in full-time studies’). The pattern of employment is similar throughout each of the UK jurisdictions; although a significantly greater number of students in Scotland and Northern Ireland work between 6 and 20 hours per week when compared to those in England.

A general assumption is that students with the least resources and family support are more likely to seek employment during the term and work for a greater number of hours. It follows that students from less advantaged backgrounds may be more susceptible to financial pressures and more working hours. The questions addressed here relate to the backgrounds of students and the distribution of working hours per week.

Does postcode area determine the working pattern in term time?

The student academic experience surveys since 2017 have gathered data about the areas students come from. These are subdivided into quintiles based on postcode areas according to the level of participation in Higher Education. This is known as POLAR which stands for 'Participation of Local Areas' in university 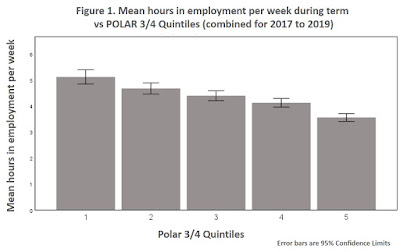 access. It is an invention of the Higher Education Statistical Agency (HESA) and the Office for Students (OfS) and is defined as “The POLAR classification places local areas into five quintiles, based on the higher education participation rates of 18 year olds in the locality” (see also TEFS 6th April 2018 ‘Flying over the UK on a POLAR expedition. The distant cracks in university access are widening’).

Initial analysis in Figure 1 reveals the overall pattern of working in term time. This covers versions 3 and 4 of the polar classifications. Those from the lowest participation areas (Quintile 1) on average work significantly (P<0.01) more hours than those from the highest participation areas (Quintile 5). The participation areas have been broadly equated to levels of disadvantage, however this crude assumption can be highly misleading (see the recent report from the 'Durham University Evidence Centre for Education' (DECE) called ‘Using contextualised admissions to widen access to higher education: a guide to the evidence base’ and discussed by TEFS on 19th April 2019 in ‘Grade inflation and contextualised admissions to university are stirring up a wasp’s nest.’). 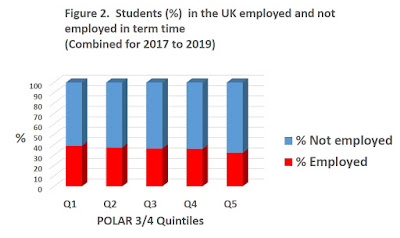 This criticism of POLAR is further upheld by the working hours reported by students here. Despite a significant tend towards fewer hours for students from Quintile 5 areas, there is still a large number of students from these areas resorting to employment in term time.


Figure 2 shows the proportion of students employed in term time and again the observation that many students from Quintile 5 areas are employed comes to the fore. 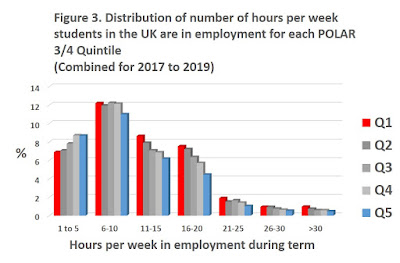 Does type of school matter?

The student academic experience surveys since 2015 have gathered data about the type of school that students have come from. A general assumption is that those who attended independent, fee-paying schools come from more 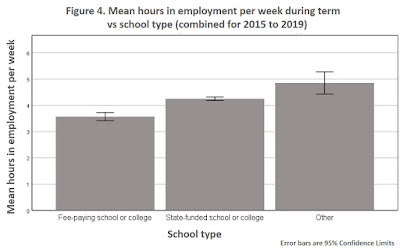 advantaged and better resourced backgrounds. Indeed, Figure 4 reveals that students from state and other types of school (of which there are a very small number) on average work more hours per week in term time. However, the fact that so many students from independent schools find they must seek employment in term time comes as a surprise. Again, the overall data hides the distribution of hours worked. 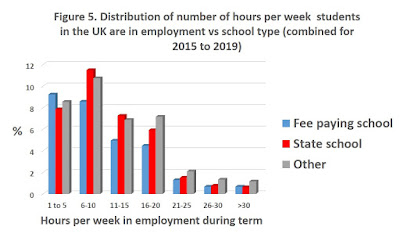 distribution for students from independent schools compared to those from state schools. Those from independent schools work fewer hours per week and the distribution tails off quickly. In contrast, a greater proportion of state school students find they are working many more hours per week. It seems that school matters to some extent but this is not exclusive.

Does type of University matter.

Data about the type of university that students attend has been gathered since 2012 and again there is a general acceptance that those from more advantage backgrounds are more likely to attend the elite universities, such as those in the 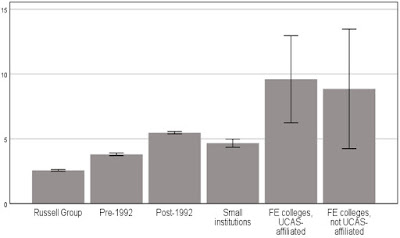 Russell Group. Figure 6 indicates the overall difference in employment hours for students attending each type of institution. Those in the newer post 92 universities work on average significantly (P<0.01) more hours per week than those in the Russell group universities. Many factors could determine this trend, such as differences in academic workload or contact hours that provide the ‘free’ time for employment. Certainly the contact time required by all UK universities has tumbled over the years. Or it might be simply, and more likely, that those in most need of employment tend to go to the post-92 institutions. 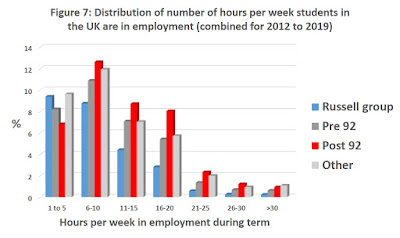 This might be borne out by the distribution of hours in employment in Figure 7. There is a familiar pattern of students in Russell Group universities working fewer hours per week compared to those at other universities or colleges.

The likely financial pressures affecting the need for students to seek employment in term time were discussed in the earlier TEFS analysis ‘Students working in term-time: Overall pattern across the UK’. This further analysis challenges the assumption that POLAR area and type of school or university necessarily equate to levels of advantage/disadvantage. A sizeable proportion of students from areas seen as more advantaged, attending independent schools and elite universities, find they are working during term time. Admittedly, they tend to work fewer hours and well below the 10 to 12 hours that could detract from studying. However, they are losing out on social interactions and other activities. It perhaps should be no surprise that some hard-working families that support their children through independent school find that the fees have exhausted their finances and further support through university becomes difficult. Those students many take on paid work to keep up with the social side of university in the absence of the generous family support given to the majority of their peers. The power of being socially excluded, due to a lack of money needed to take part, should not be underestimated. On the other hand, talented students from areas and schools perceived as disadvantaged might find that they attract more support and bursaries that alleviates the time spent in employment. Yet a sizeable number of students are working well above 15 hours per week. They may be in the minority, but they should not be left behind academically or socially. For these students, the idea of working to afford a social life becomes redundant. They are forgoing a social life from the outset and working even more hours will eventually eat into their academic studies. Some may have a relatively so-called ‘advantaged’ background, but without family support, they are just as vulnerable. Experience with many students over many years has taught me that it is the individual that matters. Circumstances can vary greatly when students find themselves overstretched. Maybe it is time that we challenged the perceptions surrounding the idea of what ‘disadvantage’ really means.