Students working in term-time: Commuter students and their working patterns 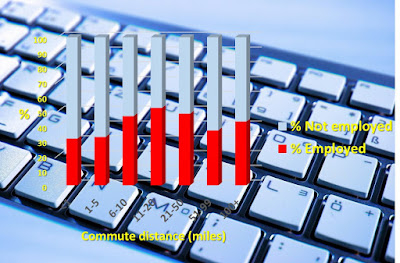 This article and analysis shows that commuter students are more likely to be employed in term time and also more likely to work longer hours. Two recent studies of commuter students (one a quantitative and the other a qualitative analysis) attending six universities in the London area revealed that commuter students were at a disadvantage in terms of outcome when compared to their peers. There is an urgent need for institutions to consider the actual time that their students have to study as the main measure. This is a way to integrate the time pressures of other activities such as commuting and employment that all add up to less time for studying.

The general conclusion of the two studies was that “travel time remained a significant predictor of student progression or continuation for UK-domiciled full time undergraduates at three of the six London institutions”. This is perhaps not surprising for someone who spends much of the day travelling and the recommendation is that the framework should be extended “to relate travel time with attainment and/or graduate-level employment”. But both studies failed to look closely at another factor that relates to travel time; that is the number of hours students are also in employment. It is likely that a combination of travel and working hours leads to a deficit in study time. There seems to be a trade-off between travel time, working hours and time to study. The Higher Education Policy Institute (HEPI) report of 2018 ‘Homeward Bound: Defining, understanding and aiding ‘commuter students’ acknowledges that many commuter students do so to retain local employment. However, there is little detail and the authors acknowledge that “more work needs to be done to disentangle the various factors that might impact commuter students’ experience of higher education on top of their travel and accommodation status, most notably their ethnicity and time spent in paid employment”


Recent TEFS analyses of data from the AdvanceHE / Higher Education Policy Institute (HEPI) Student Academic Experience Survey reports from 2012 to 2019 revealed that the pattern of term time employment of students had not greatly altered since 2012 (see TEFS 19th July 2019 ‘Students working in term-time: Overall pattern across the UK’. The majority of students surveyed were not employed in term time and this fitted a general observation of employment data from the Office for National Statistics (ONS) quarterly employment data (see TEFS 27th July 2018 ‘The vast majority - one million - of students have no employment when in full-time studies’). A follow up TEFS analysis of the same survey data reveals that students having to seek employment in term time are not necessarily confined to those from so called ‘disadvantaged areas’ or from state schools. Those from more advantaged areas and backgrounds can also find themselves under financial pressure and working during term time (see TEFS 9th August 2019 ‘Students working in term-time: Challenging the ‘disadvantage’ shibboleth’).


It has been suspected for some time that there is a detrimental effect of commuting to university on student outcomes. The Sutton Trust highlighted the extent of the phenomenon with a report ‘Home and Away’ from 2018 that concluded “state school students are 2.4 times as likely than their private schooled counterparts to stay at home and stay local, increasing to 2.6 times more likely since the increase in fees”. To mitigate any problems for such students, it recommended that “Universities should consider more flexible timetabling of lectures where they have seen large increases in students commuting from the family home to attend university.”

The two reports released last week in London Higher go further into the effects of commuting on student attainment. The first is a quantitative study ‘Results of a pilot project on factors affecting continuation’. The second addresses ‘Qualitative perceptions of students about commuting and studying in London’. The former concluded that “travel time was found to be a significant predictor affecting progression or continuation for full-time first degree first year undergraduates at three of the six London participating institutions”. The second study concluded that “Students were striving for good degree outcomes and graduate employment, but not valuing wider engagement in the student experience”. They are both very important and detailed analyses of data extracted from HESA Services Ltd and student testimonies from six universities. They raise the alarm on genuine concerns for some students. Both studies rightly considered commuting time and not distance in the context of London. Elsewhere, distance may be a better measure than time; even if time is the key resource as far as students are concerned. A question arises about what might be other compounding factors and possible causes of lower attainment. A hint is in the qualitative report that looked at the reasons behind the decision to commute and these included “cheaper rent in more distant neighbourhoods and/or being able to afford a larger living space; being closer to family, friends and part-time employment”.

A general assumption might be that students commute from home to a local university in order to incur lower costs. It follows that this is more likely to avoid the need for part-time working in term time. They are effectively trading off commuting time against study time. However, analysis of the underlying data from the AdvanceHE / Higher Education Policy Institute (HEPI) Student Academic Experience Survey reports from 2012 to 2019 reveals a startling trend. 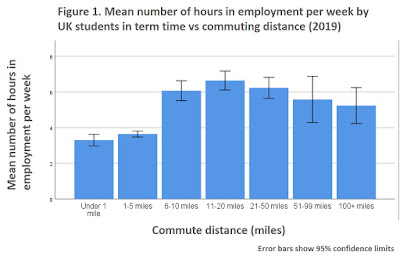 Figure 1, derived from the data from the 2019 survey, shows that those commuting longer distances tend to spend more time in employment. However, this understandably declines as the commute distance expands over 20 miles. The trade-off seems to be between commuting time and time in employment. 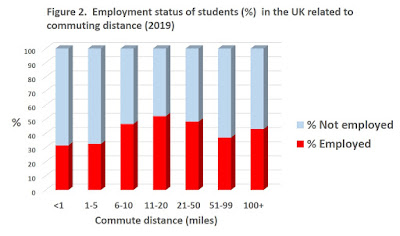 Figure 2 shows a similar trend in the proportion of those in employment vs the commute distance. More students that commute over twenty miles to their studies also work part-time. However, again this proportion drops off as the commuting distance expands. It is then appropriate to consider the distribution of working hours amongst these students. 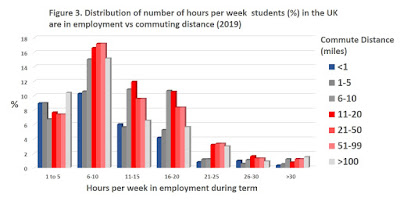 Figure 3 shows a general trend for students commuting longer distances to also work the most hours. However, this also declines as commuting distance extends beyond 20 miles. The pattern is alarming. Data not shown here shows that students from POLAR Quintile 1 areas and those attending Post 92 universities and also more likely to commute for over 20 miles than their peers.

The likely causes and a new approach.

The ‘Qualitative perceptions of students about commuting and studying in London’ study comes closest to revealing the reasons that students trade-off commuting time against university engagement and social life. It also betrays a belief that university life is not so important to these students with the conclusion that there is a “lower priority given to engagement in enhancement and support activities and minimal engagement in social activities with higher education (HE) peers”. This is tragic and excludes them from the powerful force of peer pressure in enhancing attainment and success. In my time teaching and supporting students for 36 years, the trend toward more students commuting and working seemed inexorable. Yet, when questioning them about this, it was not seen as important.  My approach was to ask them to consider where they are finding the time to study and how much time they really needed. This is because from my side it loomed as the main obstacle to them achieving their potential. But many did not seem to grasp that it was a real problem for them until it was too late.

The compounding factors of home, caring, travel time and employment should be looked at together as important to success. Addressed individually they may seem unconnected. There is an urgent need for institutions to instead consider the actual time that their students have to study as the main measure. This is a way to integrate the time pressures of other activities such as home, caring, commuting and employment that all add up to less time for studying.