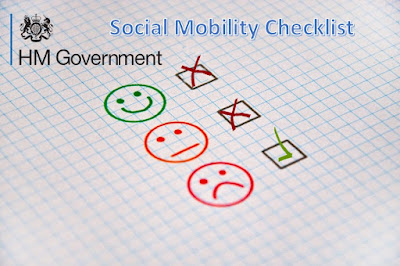 A revamped Social Mobility Commission (SMC) was launched last year with a promise of much greater things to come. It came after a long gap in its existence and the abject failure of its previous incarnation. Blame was laid firmly at the door of a neglectful government that starved it of resources.

TEFS (22nd March 2019 ‘Social Mobility Commission: Where are they?) recently reported little progress had been made and we are now in the middle of April 2019. It seems that once again the SMC has dropped below the parapet fearful, or simply unable, to come out and fight for the people that need fairness the most. The SMC web site is still lacking in important information. The declarations of interest of the SMC board members still dates back to 2016. Despite the promise of monthly meetings, there appears to have been none reported since January as of today. A February meeting was intended to be a regional meeting. At the outset of the relaunch the government stated that, “in March, will set out their annual State of the Nation assessment of social mobility in Great Britain.” There is little sign of it.

Whilst unfortunate circumstances can stall meetings, and we wish anyone who is unwell a speedy recovery, a sound organisation must continue with an effective backup plan. If the secretariat has been diverted to Brexit related work, then it would seem that social mobility is not a high priority for government. If members of the SMC are too busy to attend meetings, then they might consider stepping down.

Attitudes to social mobility must change.

Social mobility may mean different things to different people. The OECD describes social mobility as: “the extent to which individuals move up (or down) the social ladder compared with their parents”. The Sutton Trust says it is “how someone’s adult outcomes relate to their circumstances as a child”. In the past, it might have been taken somewhat more literally in relation to acquiring a job by using a bicycle. The conservative Employment Secretary Norman Tebbit also said in relation to the Thatcher government that, “Parliament must not be told a direct untruth, but it’s quite possible to allow them to mislead themselves.” This may easily be the bye line of the current government that convinces itself that all is well with our society and that contrary evidence can be brushed under the carpet. However, it seems that by the end of last year, some attitudes might have changed.

Off to a flying start.

The relaunch of the Social Mobility Commission last year was supposed to herald a rejuvenation of the cause of improving social mobility in the UK. Our country has a poor track record in this respect as evidenced from reports from the Sutton trust and the OECD. The situation has persisted for far too long and the urgency of the SMC’s task cannot be understated at this time.

The SMC launch on 11th December 2018 coincided with the publication of a ‘Social Barometer’ report that covered public attitudes to the issue. The new chair, Dame Martina Milburn said: “We are a group of people with real-life experiences who are prepared to challenge government, business and society as a whole, to create a fair system where people can thrive.” The plan was clear. The twelve new commissioners would have up to £2 million released by government for research projects from April 2019. One might expect the evidence base of their work to improve dramatically. Emphasis for the first period was to be on vocational education and skills. By last month the SMC should have produced its annual ‘State of the Nation assessment of social mobility in Great Britain.’ Neither report or calls for research projects have emerged.

The first meeting of the SMC on the 18th of December 2018 was reported in notes from the following meeting of 25th January 2019. The immediate response of any observer was one of deflation and lowered expectations. Indeed, three of the twelve commissioners did not turn up; a bad sign for a first meeting in anyone’s book.

Two important reports in the SMC pipeline must have been prepared well before the new SMC was launched. The report on the ‘Adult Skills Gap’, promised in December, was released on 29th January 2019. It is especially notable in its failure to cite a key paper from the OECD last year on the main topic (see: Zwart, S. and M. Baker (2018), “Improving productivity and job quality of low-skilled workers in the United Kingdom”, OECD Economics Department Working Papers, No. 1457, OECD Publishing, Paris. http://dx.doi.org/10.1787/14dfd584-en). In science publishing, this would be seen as a major omission of pertinent evidence.

In addition, a long awaited report on ‘Elitist Britain’ carried out with the Sutton Trust in 2017 was not released. Instead the Sutton Trust are due to announce a further study in April 2019. However, a simple check of the Sutton Trust research report ‘Leading people 2016’ would suffice. A valuable ‘Employer research and toolkit’ report was discussed but a date for release was not determined.

The SMC Board agreed at the outset that it should “continue with the great work of the previous Commission”. Not a great aim in the light of its collapse. The sights were lowered even further with acknowledgement that the “social mobility landscape is crowded and they should be careful not stray into areas beyond its remit.” Surely the SMC should be leading the way and bringing all in the “social mobility landscape” together, not avoiding them. Even more contradictory was agreement that the “new Board would need to consider whether they wanted to revive any of the past recommendations that had not been acted upon and take them forward.” There are a total of 188 recommendations from earlier work and none of the issues they addressed have gone away. So much for continuing the “great work”.

The annual report for 2018/19 is now eagerly awaited as their plans eventually emerge. One thing they might consider in a proactive manner is the OECD report of 2018 ‘A Broken Social Elevator? How to Promote Social Mobility’. Therein lies a clear action template based upon existing research.

The sorry tale of past neglect.

The past neglect of the SMC itself is almost a metaphor of the neglect of disadvantaged people by a government that fails to take positive action and take responsibility. By the time the dwindling SMC board all resigned in 2017, in protest at the lack of will by government, there were only the chair and three commissioners left (as reported by TEFS 3rd December 2017 ’Social Mobility – The New Lie: ‘Dulce et decorum est pro patria pauperibus’). This was followed by removal of Education Secretary, Justine Greening from her position. It later emerged that she may have been too proactive (see TEFS 25th January 2019 ‘Entering the Lion’s Den: Can the Conservative establishment be tamed?’).

By May 2018, Robert Halfon had brought forward a ‘ten minute rule’ Bill to Reform the Social Mobility Commission on behalf of the House of Commons Education Committee (reported by TEFS 24th May 2018 ‘Justice for the Social Mobility Commission: A fresh start?’). Their aim was to strengthen the commission. Under the banner of a ‘Social Justice Commission’ he called for much greater powers. It is worth looking at his presentation below again in the light of recent inaction from the SMC. That this fell by the wayside says more about the prevailing government attitude than the genuine concerns and determination of the Education Committee.

The SMC should look again more seriously at ‘Time for Change: An Assessment of Government Policies on Social Mobility 1997-2017’ or risk seeing history repeat itself.

In the context of ‘Goldfinger’, Ian Fleming observed that: “Once is happenstance. Twice is coincidence. Three times is enemy action”.