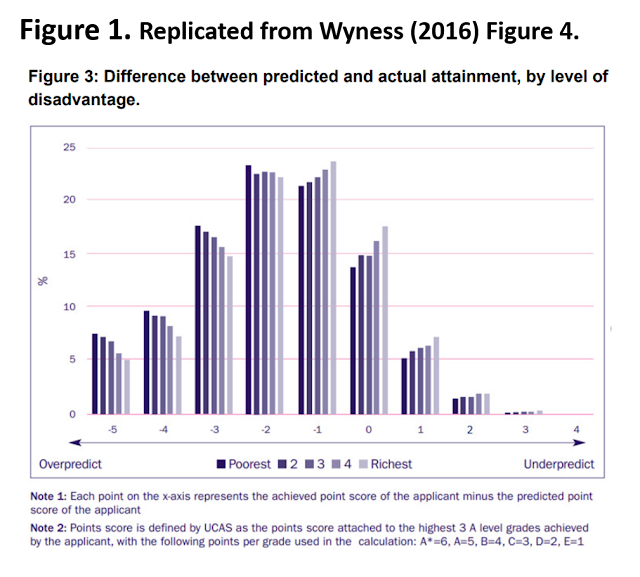 Yet the results from the 2014/15 data in the Wyness (2016) report show that ‘over prediction’ is the biggest issue and this is more common overall for disadvantaged students. ‘Under prediction’ is seen as less of a problem “As Figure 4 shows, that those applicants from the most disadvantaged backgrounds (ie POLAR groups 1 and 2) are the least likely applicants to have their grades accurately predicted. They are also more likely to have their grades over-predicted than those from more advantaged groups.”
It is also important to note that POLAR Version 3 quintiles are used as a proxy for disadvantage (TEFS 29th April 2019 ‘POLAR whitewash fails to cover all surfaces’ for a critical overview). Also, the difference in predicted and actual grades as +/- points are “defined by UCAS as the points score attached to the highest 3 A level grades achieved by the applicant, with the following points per grade used in the calculation: A*=6, A=5, B=4, C=3, D=2, E=1”.
The fate of high ability students.
The main issue is seen as under prediction of disadvantaged students results who get grades at the higher end. This is stated in the Equality Analysis as:
"Wyness (2016) finds that high attaining (AAB or better) but disadvantaged students are more likely to have their grades under-predicted than high ability students from more advantaged backgrounds. This means that PQA is likely to have a positive impact on high attaining but disadvantaged students."
But the DfE consultation should have shown the evidence to back this up.
Wyness (2016) notes two important things.
1. “Only a small number of disadvantaged young people fall into the high-attainment category”.
2. “Among these AAB applicants, applicants from the most disadvantaged group are slightly more likely to have their grades under-predicted than those from the least disadvantaged groups”.
These conclusions are based upon Table 2 from Wyness (2016) and shown here in Table 1. 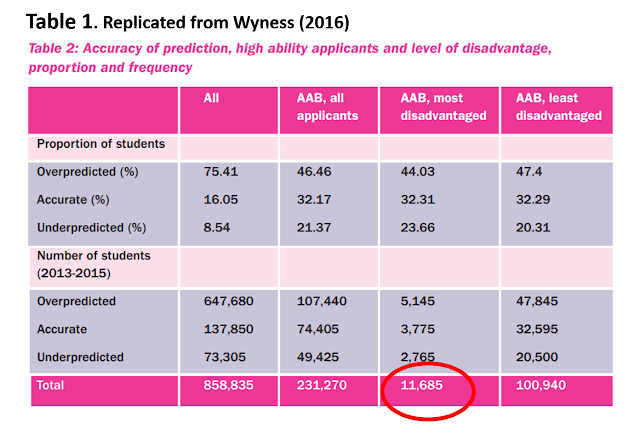