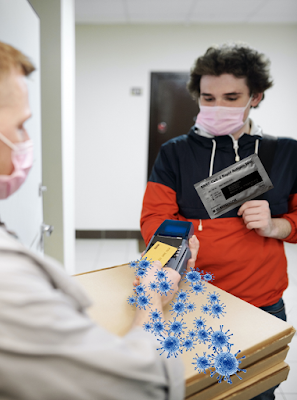 The title illustrates how the same data can be presented to give different impressions. There is currently a general perception that most students are employed in the hospitality industry and the closure during the ongoing pandemic lockdowns have resulted in a collapse of the job market for them. But things are not so simple. Analysis of the latest Office for National Statistics (ONS) employment data indicates the student job market has not totally collapsed. This is good news for some students who managed to secure furlough pay or employment of some kind. However, the 5% loss of employment between February 2020 and February 2021 equates to over 75,000 fewer students in employment. This partly explains why the hardship support from the government has been inadequate and needed to be topped up. It also indicates that pressures on employed students continued into the lockdown.
Not all students are affected.
The recent employment statistics illustrate clearly how there is a two-tier experience in higher education in the UK. It can be divided into those with time to study and enjoy university life and those who struggle with time because of other commitments such as jobs. In the past, TEFS reported the fact that ‘The vast majority - one million - of students have no employment when in full-time studies’ (27th July 2018). This may be surprising to some, but it illustrates the so called ‘middle class’ nature of being at university. 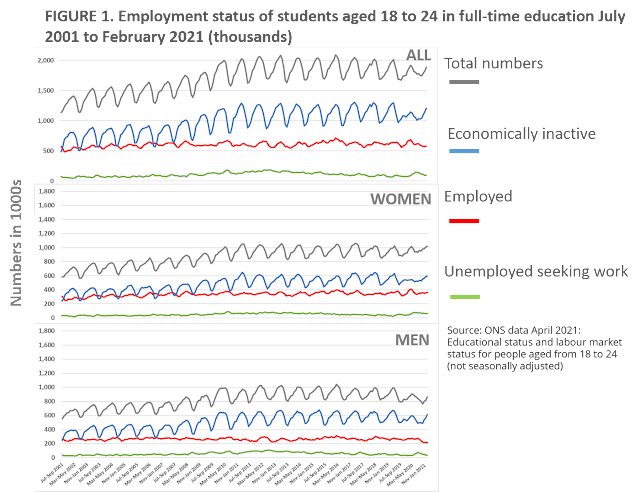 Figure 1 shows the employment status of students aged 18 to 24 in full-time education from July 2001 to February 2021 (this illustrates data taken from the ONS ‘Educational status and labour market status for people aged from 16 to 24 -not seasonally adjusted’ that are sourced from the Labour Force Survey, a survey of households). The expansion of fulltime students and those economically inactive is an interesting trend. The cyclical ‘sawtooth’ effect is caused by a proportion of those students taking up employment in the summer months. There is no big gender difference other than fewer women are economically inactive.
The result is, over 60% of students in the UK are able to devote most of their time to their studies, clubs, societies, and a social life. I can confirm that most of such students also work hard and do their best to succeed. However, a sizeable minority are under considerable time pressure and need to hold down part-time jobs in both term time and in the vacations. They represent an ‘underclass’ that seems to be a blind-spot for the current government (more so in England than in Scotland, Wales and Northern Ireland to be fair). As they struggle, they become like Gogol’s ‘Dead Souls’ who are recorded as ‘students’ but in fact they are really becoming lost in the system.
The overall picture.
A number of studies and reviews have looked across the labour market at the employment situation in the UK during the COVID-19 crisis. The overall conclusion is that unemployment has been pegged by the very expensive government ‘Job Retention Scheme’ or ‘Furlough’ scheme. A comparison of the effects across the UK, Germany and France was made by the Resolution Foundation this week that showed a greater effect in the UK that was badly hit in the crisis (21st April 2021 ‘After shocks: Financial resilience before and during the Covid-19 crisis’). Job retention schemes have been a major force in mitigating unemployment, and this has been particularly important in the UK where the take up has been very high. The House of Commons Library also released a very useful research briefing ‘Coronavirus: Impact on the labour market’ (25th March2021), that reached similar conclusions. The impact of unemployment on younger and older workers has been more severe but the furlough scheme has held back the tide. Unfortunately, unemployment has always had the greatest impact for those on the lowest incomes and COVID has exposed this precarity more. The pressure on students from lower income families will have increased.
The student job market and the ‘lost souls’.
The regular data releases from the ONS Labour Force Survey are a good overall indication of what is happening and no doubt the government considers these carefully. However, in relation to student employment, this might not be careful enough. On drilling into the headline figures, that show higher unemployment amongst younger people, it becomes clear that the job market for students has not totally collapsed. 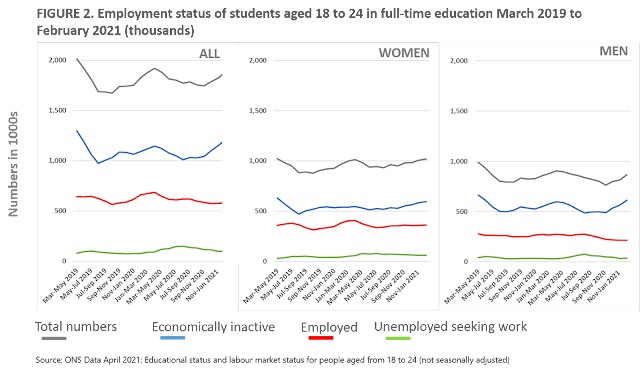 Figure 2 shows the employment status of students aged 18 to 24 in full-time education between March 2019 and February 2021. Although the employment of students appears to have remained high, there was also a decline in employment since March of last year. Overall, there were 5% fewer employed in the twelve months since February 2020 (1% unemployed and 4% economically inactive). This is not a small number and equates to over 75,000 students who are looking for work or have become economically inactive. There was a 4% decline in women students employed, split equally between unemployed and economically inactive. For some men, it is starker with 7% fewer employed and all economically inactive.
Resilience of students in an unequal system.
The reason behind the apparent stability of the student job market mainly lies in the astounding resilience that many students possess. Access to the ‘Job Retention Scheme’ helped. Last year, the National Union of Students (NUS) released a very helpful guide for students with, ‘Support for Student Workers – COVID-19’ (6th April 2020). This and other advice must have spurred them on to seeking help fast. Whilst the vast majority are not eligible for benefits such as universal credit, their part-time jobs and zero hours contracts were open to the job retention or furlough scheme. Many listed as employed in the ONS statistics will fall into this category. Reports from the Resolution Foundation (17th February 2021) ‘Long Covid in the labour market’ and recently (26th April 2021) ‘A U-shaped crisis: The impact of the Covid-19 crisis on older workers', showed that a larger proportion of those furloughed were in the 18-24, or under 18, age brackets and this affected the hospitality sector the most. Although students were not identified separately, it must be assumed that they were included by employers who wanted to retain good employees. Certainly, many students who stayed at home could avail of jobs they had prior to university with employers they knew. Although uncertain, the extensions of the scheme must have convinced many not to leave their studies as noted by TEFS (4th December 2020 ‘Turn up, log in, drop out…… suspend studies?’). The extension of the scheme announced in March, albeit with declining support to September 2021, is another valuable boost (‘Changes to the Coronavirus Job Retention Scheme from July 2021’).
A feature of the job retention scheme is the ability to take another job with a different employer whilst on furlough. This data is not readily available for students, but it would be of considerable interest. It would not be surprising to find students furloughed in their hometown whilst they worked in a warehouse or were delivering goods elsewhere (I have met some delivering locally but do not know the extent of this).
But there are dangers in the inherent inequalities for those in employment.
TEFS recently addressed the concern that students will be further stressed as examinations loom (16th April 2021 ‘Students return to exam stress’). It is likely that many will have underestimated the effort needed to keep up with online lectures and assignments. While some wanted more ‘face-to-face’ lectures, others called for recorded material. This would have been driven by a need to access material outside working hours. Revision for exams at the last minute is nothing new, but doing it in isolation from scratch and part-time must be horrendous.
The coming examinations period will expose the effects of the lockdowns and the working pattern of students to a stern test. Hopefully, those with the least advantages in time and resources will not be too badly affected. Unfortunately, this may only become clear as data is gathered over the next year.
Mike Larkin, retired from Queen's University Belfast after 37 years teaching Microbiology, Biochemistry and Genetics. He has served on the Senate and Finance and planning committee of a Russell Group University.