The state of UK universities in lockdown 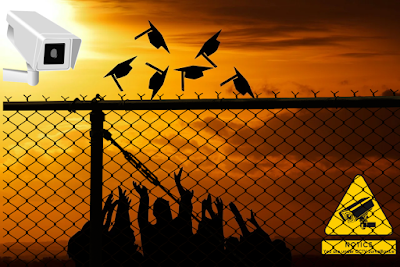 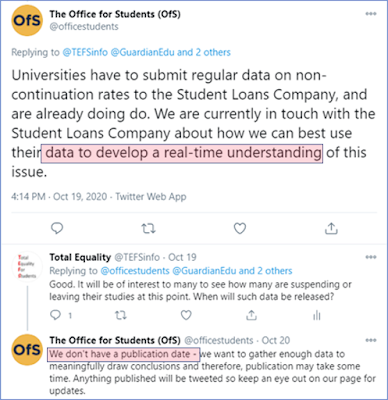 What can students do if they are struggling?
Every institution has a set of well-developed rules and procedures to accommodate students wishing to suspend their studies after term has started. Deferrals only apply to those seeking to do so before they register (matriculate) at their University. It is likely many were advised to register to get on the books and then seek help. This puts them on a very different footing. The threat of not being allowed to defer studies for a year, and having to apply again next year, would have coloured the decision to press on this year. Once in the door, the options open out. All universities have similar rules, and in better times these would have been deployed on occasions to help students manage their way through their studies. This year may have been different.
Manchester University is as good an example as any. They offer a route to ‘suspending studies for a period’ and this is a good option for students finding they cannot proceed because of unexpected financial changes or other reasons. This is termed ‘Interruptions & Withdrawals’ in Manchester. The full policy is outlined here. It states “If you come across some difficulties during your studies which mean that completing the semester, year or remainder of your degree is not possible, you might want to consider a temporary interruption or withdrawal from your course.”
As a lecturer at another Russell Group University, I advised many students to take this option if they were finding their situation was damaging their studies too much. Many of these were being dragged down by part-time jobs. The consequences are often not as bad as many students think. Manchester University goes on to spell out that there is likely to be a financial cost. However, many students may have factored this into their plan at the start.
These are:
Withdrawal/suspension between 05/10/2020 – 10/01/2021 – 25% of the total fee will be charged
Withdrawal/suspension between 11/01/2021 – 11/04/2021 – 50% of the total fee will be charged
Withdrawal/suspension between 12/04/2021 – 11/06/2021 – 100% (i.e. the full tuition fee) will be charged
This means that students in Manchester could still seek to suspend their studies up to the end of this term citing the difficulties they are currently experiencing with finances, the lockdown, or both. Bearing in mind some students will be tied to accommodation contracts for at least one term, it is likely they will sit it out for now. Some Universities have promised to release students from accommodation costs if they leave early, however Manchester University is very vague on this point. By the end of term, with fee deadlines looming, more may see it as better to try to start again next year.
A perfect storm.
TEFS looked in some detail at the situation for students and finances at university back on the 26th August 2020 in ‘The perfect storm for Universities PART TWO: The COVID-19 ‘time bomb blind-spot’. There is no reason to conclude that the situation might be getting better. The scene is playing out as expected as the various UK governments respond too slowly in their different ways.
A report from the Institute of Fiscal Studies (IFS) earlier this week, ‘2020 annual report on education spending in England’ painted a bleak picture of university finances. The main focus of its accompanying online webinar ‘Resource challenges facing further and higher education’ was on the escalating cost of the staff pension scheme. TEFS also looked at the situation with ‘How precarious are universities in the UK?’ back on 22nd May 2020. By pointing out in the IFS webinar that most students do not know how much of their fees are going on propping up the pension payments, they simply added petrol to the fire. But of course everyone teaching them has a pension, that is the expectation. The main report also recognised the potential of losses accumulating with the departure of students by saying, “While student numbers appear to have held up for now, universities might still lose income if large numbers of students drop out before completing their degrees.” Paying back the upfront money from the SLC could be the straw that breaks the camel’s back. TEFS warned of a very likely scenario in ‘Impact of Coronavirus measures on the working student: The nudge that breaks the camel’s back’ on the 16th of March 2020 with,
“The measure of a university will be in how they react to support their students most affected. If they fall short, it will be widely reported and those watching will remember who they are. The challenge is there. Rise to meet it.”
It now seems things are about to unravel unless firmer action is taken. The problems in Manchester are not unique as the situation in other universities is revealed (see The Guardian today ‘England campus lockdowns creating ‘perfect storm’ for stressed students’). Rent strikes and further disruption are on the rise. Waiting for more data to come in is not an option. Instead, proactive measures are needed. To break the downward spiral, the government and universities should ‘test and disperse all students’ and admit the plan to date has backfired. More students will vote with their feet if they sense they are of secondary importance.
Mike Larkin, retired from Queen's University Belfast after 37 years teaching Microbiology, Biochemistry and Genetics. He has served on the Senate and Finance and planning committee of a Russell Group University.