The impact of coronavirus on schools and examinations served to bring the inequalities in education into the light of day. But alongside this there has been an overwhelming sense that analysis, analysis, analysis has overtaken positive action. The words of the Elvis Presley song were penned in a somewhat different context back in 1968. But they have been used in many political campaigns since. They are revisited here because it seems we have a government that has seen plenty of evidence of the searing inequalities in fair access to education and opportunity yet choses to turn away from taking adequate action.
Yet another analysis emerged in Scotland that shows the profound inequalities that exist and are exacerbated by government policies. This was revealed on the 18th October 2020 in a report on the distribution of downgraded of exam results in Scotland this summer. It took a closer look under the weighty stone of ‘standardisation’ and found things the government would like to be left alone. Those with greater advantages seem to fare better and take the pole positions in access to the elite universities without the burden of fees.
The shocking outcome of down grading in Scotland.
A report by Barry Black of Glasgow University’s ‘Urban Big Data Centre’ on the 18th October 2020 ‘The Scottish Qualifications Authority’s 2020 Alternative Certification Model – the deprivation impact’, will have gone unnoticed in the rest of the UK. Yet it raised considerable interest in the local press across Scotland, and in particular in Scottish cities. And so it should. It explains why the Scottish government had to act so quickly and precipitate and similar U-turn on calculated exam grades across the rest of the UK (see TEFS 11th August 2020 ‘Stupid or wilful: Exam results common sense fails to spread from Scotland’)
This was especially noticeable in Edinburgh where the range of down grading went from a staggering 46.1% in one state school (close to where I live) to only 6.3% in a well known independent school. Independent schools magnify the social divisions most in the capital and COVID-19 has revealed something stark. Black simply compared the downgrading with the proportion of school students in receipt of free school meals. The first thing to notice is the wide range of schools requiring assistance to feed their students. None at the 41 independent schools to over 40% in fine of the most deprived schools. The results are more striking for the Higher results. In Scotland, these examinations mark the future, or not, in Higher Education for those taking them. They are the main gateway to upward social mobility. The figure shown here illustrates the stark reality for those with few advantages and the way the examination standardisation this summer punished them the most. 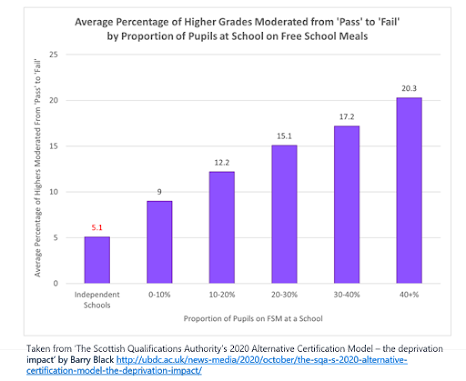 Torrents of ‘analyses’.
There have been torrents of analyses that all point the same way to inequality and unfairness. This week is no exception as more came pouring in. The Guardian reported that students in care get some or little help depending on where they live (Guardian 29th October 2020 ‘A postcode lottery is stopping children in care from going to university’. This is despite the glaring well documented gap showing that “The numbers are staggering: just 12% of care-experienced pupils compared to 42% of their peers”. This was known for years and is neglected.
The Sutton Trust is often in the vanguard of advocating help for disadvantaged students. Yet they must be disheartened by the feeble response coming from the government. Their report yesterday ‘PQA: Reforming university admissions’ indicated that most students would like to see a move to post qualification admissions to universities. This is because the most advantaged students benefit more from being made offers in advance of their exams. Yet it persists despite the Sutton Trust showing that “almost 1,000 disadvantaged high-achieving students per year have their grades under-predicted” (Sutton Trust 19th December 2017 ‘Rules of the game’).
The only explanation for the inaction must be a determination to maintain the status quo. We must ask, who benefits the most? The answer is obvious. Elvis Presley also said, “Adversity is sometimes hard upon a man; but for one man who can stand prosperity, there are a hundred that will stand adversity”. It seems the status quo will prevail as long as this remains the case.
Mike Larkin, retired from Queen's University Belfast after 37 years teaching Microbiology, Biochemistry and Genetics. He has served on the Senate and Finance and planning committee of a Russell Group University.