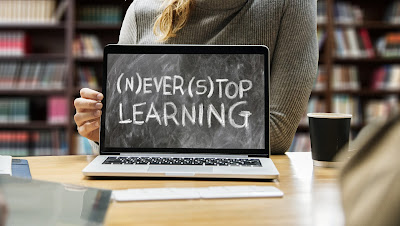 The Scottish Funding Council is conducting a consultation about the future of, and how they have been spending, considerable funds (circa £15m per year) on widening access to the universities that it funds. This is called the Widening Access and Retention Fund or WARF. The consultation closes on Friday 13th September and TEFS has looked at the context of the WARF support for universities to illustrate the complexity of the situation and the challenges that still lie ahead.

The Scottish Funding Council is responsible for funding further and higher education in Scotland. This is one of the most important responsibilities of any agency working on behalf of us and our elected government. There has been a long standing concern from all political quarters about fairness of access to universities for students from backgrounds and areas that are deprived or have historical low participation rates in higher education. As it stands now, far more students from such backgrounds move from school to Further Education courses than enter our universities. This phenomenon is not confined to Scotland and persists across the whole of the UK.

Since 2006, Scotland has diverted considerable resources to universities in an effort to improve widening access. This is illustrated and measured by looking at the numbers of students from low participation areas. Unlike the rest of the UK, that uses wider postcode areas in its POLAR methodology (Participation of Local areas), Scotland uses its own Scottish Index of Multiple Deprivation (SMID) measure that is finer grained and gets closer to the circumstances in which individuals find themselves. This gives a better picture of how well measures are working nearer to the level of the individual student. However, many fall between the cracks in any geographical methodology and the use of the wider POLAR methodology elsewhere in the UK has come in for considerable criticism (see TEFS 22nd April 2019 ‘POLAR whitewash fails to cover all surfaces.’ SIMD combines measures for income, health, access to resources, employment, education, crime and housing in small geographical areas with populations on average of 760 people. In this sense it is a reasonable measure to guide where interventions can be made to most effect. But the Scottish Government’s own caveats such as: “Do not Use SIMD for identifying all people who are deprived in Scotland – not everyone who is deprived lives in a deprived area” still hold.

Key questions in the consultation.

Currently a total of about £15m per year is sent to eight universities (including the Open University not considered here) to boost their access and retention participation efforts. The recipients are the newer post-92 institutions that are considered to be effective at attracting and retaining students from SIMD20 areas. It is intended for “universities with a high SIMD20 intake and lower retention rates”. The consultation ‘Widening Access and Retention Fund (WARF) Consultation 2019’ considers how best to distribute the funds in future in relation to past achievements. WARF began in 1994-95 with the consolidation of various schemes and has evolved to its present position. The review itself comes from recommendations of the Commission on Widening Access that wants to “ensure the most efficient and effective use is made of WARF to support Fair Access in Scotland”. See also TEFS 28th June2019 ‘The long road to Fair Access in Scotland’. The stated purpose of the consultation is to “seek input on the need, purpose and distribution of WARF”. The key word is ‘need’. Within the online consultation are questions that might betray the real purpose such as: “What access activities should an institution reasonably deliver from its core funding?” and “Should WARF continue?” Institutions with no WARF might seek to stop it whilst those with the funding will worry about the loss of funds that impact upon their student numbers.

The environment within which WARF is operating: Where do the universities stand on access?

The SFC publishes considerable data that uses SIMD20 as the main measure of widening access. The schedule for statistical releases are readily available at their www site listed under publications and statistics. The data used here derives from the latest participation and retention data for Scottish Universities that covers 2017/18. The research ranking of universities is from Times Higher and REF 2014. The UCAS entry requirements as tariff scores are gathered from the latest ‘Complete University Guide Rankings 2020’.

As for the rest of the UK, the SFC data (not shown here) indicates that there have been small advances in the access of students from 'disadvantaged' areas to universities in recent years. However, these are marginal improvements and there is much more to be done to reach parity across the population. The SFC must now advance from the current position and assess what works and how best to distribute its resources. This presents a classical dilemma. Do they spread funds across all institutions thinly or concentrate on a limited number as they do at present? 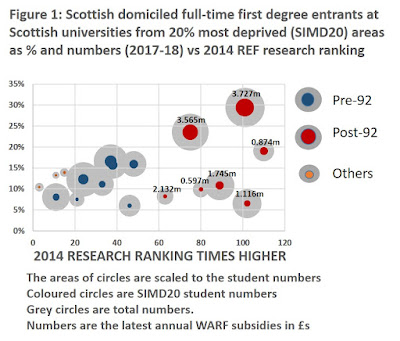 In an effort to summarise the status quo, Figure 1 plots the universities according to their REF 2014 ranking in the UK. The % of students entering in 2017/18 from SIMD20 areas is also plotted against that. The variation in types of institution and intake is apparent together. Those ranked higher in REF have more research resource than others below them. They are also more likely to have a much higher income from international students. To gauge the actual impact on numbers of SIMD20 students, these are plotted as circles with the areas relating to relative numbers. The total relative intake numbers are represented by the areas of the grey circles. The striking observation is that, although they have a lower proportion of SIMD students, the pre-92 universities still accommodate a sizeable number by virtue of their size. Yet they receive no extra WARF to help in their efforts. Also apparent is that the funds made available to the other universities (indicated in Figure 1 next to those receiving WARF) do not necessarily coincide well with success in this area in all cases. It becomes apparent that a review is needed and the outcome might be a reduction in funding for some institutions alongside stricter oversight. 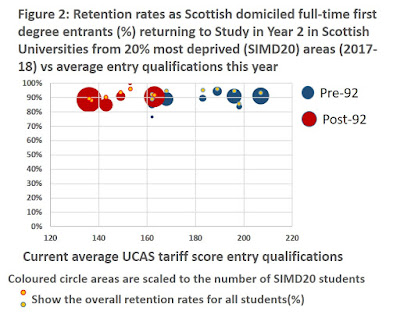 Then comes the issue of retention. Figure 2 looks at the retention data from 2017/8 across the pre-92 and post-92 universities. This is plotted as a % versus the current average entry qualifications using UCAS tariff scores for each university. The surprise is that retention is maintained at a high level across all institutions and is only slightly depressed for SIMD students. This is perhaps of less importance.

Instead, the SFC might turn its attention to final degree outcomes that are likely to be exacerbated by the financial problems that SIMD20 students might experience. The outcome will be affected by other factors that include the quality of education they experienced prior to university and their experience and preparation. The solution to better access would involve looking more closely at the whole education cycle and alleviating deprivation earlier for them and their families.

The pre-92 universities are already considering the use of ‘contextualised’ admission criteria and the data available to them makes this possible. However, there is a cap on numbers driven by a no fees policy and a government desire to protect rocks from the sun. This will inevitably cause families who have invested large resources in their children’s education in order to achieve higher grades to react badly. The SFC has to come up with a scheme that sees the contextualised students as additional or ditch the no fees policy.

The last word might go to the Scottish Framework for Fair Access and the online Toolkit that was developed by CFE Research and launched recently (see TEFS 10th May 2019 ‘Building a Fair Access Framework: Hitting the nail on the head’). It seems that, when deploying the tool, financial support trumps all other interventions. But the use of Bursaries, Scholarships and Grants is described as “very high cost” alongside “extensive evidence which suggests it may have a positive impact.” It seems obvious and is a route that must be fairly used and not serve to disadvantage other hard working families and students. The time for ‘no fees’ is probably over and the introduction of a means-tested contribution scheme might be imperative.
Mike Larkin, retired from Queen's University Belfast after 37 years  teaching Microbiology, Biochemistry and Genetics