Building a Fair Access Framework: Hitting the nail on the head 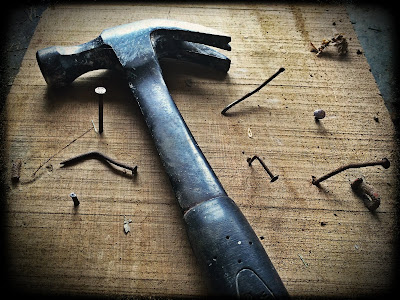 The Scottish Government has unveiled its Fair Access Framework via the Scottish Funding Council this week. Their commissioned research has led to a 'Toolkit' that ‘hits the nail on the head’ with regard to the need for financial support for disadvantaged students. Hopefully it will hammer home the message to government where others have failed.

Edinburgh University School of Informatics hosted the launch of the Scottish Government’s Fair Access Framework this week. This move is taking one more step along the long road to securing equal access to education beyond school for everyone; regardless of circumstances. The event itself was organised by the Scottish Funding Council, that oversees Further and Higher education funding in Scotland, and will be followed by a larger ‘Fair Access’ conference in Perth in June.

The delegates were welcomed by the Principal of Edinburgh University and heard the Minister for Further Education, Higher Education and Science, Richard Lochhead say that “Scotland is ahead of the curve in delivering equality of access”. Despite this boast, it seems that much more is still to be done. It is a big curve and, for the time being, Scotland just holds the inside track.

What the framework is adding to the wider task.

Two main things were announced. Both arise from the findings within the ‘Blueprint for Fairness: The Final Report of The Commission on Widening Access’ released just over three years ago in March 2016. The plan is to form a network or community of those seeking to improve access and participation and then provide them with a ready-made resource to help in backing up the plans that they formulate. Both are worthy things to do and hopefully there will be a take up of the actions described in priority order.

The framework is laid out well in a dedicated Fair Access www site that calls on those interested to join Scotland’s Community of Access and Participation Practitioners (SCAPP). If successful, this will bring together a wide range of academics and managers. To aid in their deliberations, there is an online Toolkit that was developed by CFE Research with Claire Crawford, an economist from Birmingham University and Colin McCaig, Professor in Higher Education Policy at Sheffield Hallam University. The Toolkit is a series of links from overviews of known ‘interventions’ that could be deployed. Each intervention links to a comprehensive literature and evidence base. Thus, anyone can readily divert their research into the literature through accessing the toolkit. Its value will be in preparing cases for appropriate actions within their institutions. The hope is that it will be updated over time and lead to strengthening of its implicit advice about what will work best.

Spending more money is the most effective approach.

The toolkit uses drop-down boxes to explore and assess various interventions for those at risk of withdrawal, care experienced, disability, ethnicity, first generation, mature, socioeconomic, underperforming and underrepresented. There is no specific category for those affected by financial problems and part-time jobs. However, this is implied under socioeconomic factors. The interventions assessed include financial support, mentoring, advice through to summer schools amongst others. 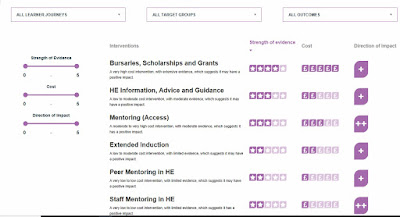 The figure here gives a flavour of what the user is presented with.

Two things emerge as one works through the various permutations when uncovering the matrix. First is that financial support trumps all other interventions. The use of Bursaries, Scholarships and Grants is described as “very high cost” alongside “extensive evidence which suggests it may have a positive impact.” This may seem very obvious to a capable student with job commitments and little money who wants more time to devote to studies. However, it needs to be said and the Toolkit provides the ammunition. It may turn out to be more of a metaphorical ‘weapon’ than a tool.

Second is that the advice and information is based upon evidence from wider afield than the UK; especially the USA. It is therefore clear that the Toolkit can easily form part of the armoury available across the whole of the UK. It will add to the pressure to provide more financial help to the affected groups of students all over the UK. Hopefully it will hammer home the message to government where others have failed.