Funding lifeline for disadvantaged students in schools under the spotlight 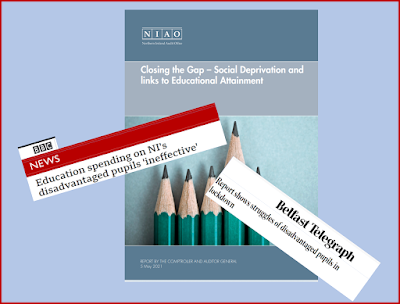 The image depicts the cover of a recent report by the Northern Ireland Audit Office that looks critically at the impact of ongoing additional school funding for disadvantaged students. Its hard-hitting conclusions must not be ignored. They show 15 years of failure and little impact despite nearly a billion spent across schools from 2005 to 2020. Similar schemes operate across the rest of the UK and the report raises serious questions about where the money is going. There is no doubt that disadvantages at home impact upon how students get on at school. But the danger is that some opponents will seize upon the findings to argue that the money should be withdrawn since it appears to do no good. Wiser heads will ask about where the money is going before reaching such a perverse conclusion. This is a time of considerable danger for those with few advantages. A wider social intervention will be needed to address the problems, and it is unreasonable to expect schools to impact things beyond the school gate and their direct control. There is certainly a need for a closer, and more realistic, look at the situation.
On Wednesday the Northern Ireland Audit Office released a highly critical report on the effectiveness of funding for Schools, measured as progress in educational equality and attainment,  with ‘Closing the Gap – Social Deprivation and links to Educational Attainment’ (5th May 2021). It considered ‘Sure Start’ funding for families and children below school age and ‘Targeting Social Need’ (TSN) funds that are encompassed in the ‘Common Funding Scheme’ (CFS) for state funded schools. The House of Commons report ‘Education funding in Northern Ireland’ from 2019 provides an excellent background on this topic. In 2019/20, Sure Start and TSN came to 6.8% of the total £2.32 billion education budget: 73.7% of this for TSN. There are issues raised about ‘Sure Start’, however, the main concern applies to TSN funding and how it is used in Schools. This was reported in detail by the BBC who observed that ‘Education spending on NI's disadvantaged pupils 'ineffective' (BBCNI News 5th May 2021). The conclusions are a testament to years of abject failure to get a grip on a long-standing problem. Over £900 million has been pumped into Northern Ireland’s schools since 2015 with the aim of closing the wide attainment gap between students with the least and most advantages (£913 million for ‘Targeting Social Need’ (TSN) funding in the 15 years from 2005-06 to 2019-20).
The attainment gap persists.
The crux of the concern about effectiveness lies with the examination attainment results of students from disadvantaged backgrounds. The level of disadvantage was assigned by Free School Meal Entitlement (FSME) in schools (96,686 or 28% of school students in Northern Ireland in 2019/20) and ‘postcode area’ defined in the Northern Ireland Multiple Deprivation Measure (NIMDM) for Sure Start. There is no hiding from the outcome. While attainment has improved year on year for all students, the gap between those with fewer advantages and the rest is still very large: 29% in 2019/20 having narrowed marginally from 32.1% in 2005/6. 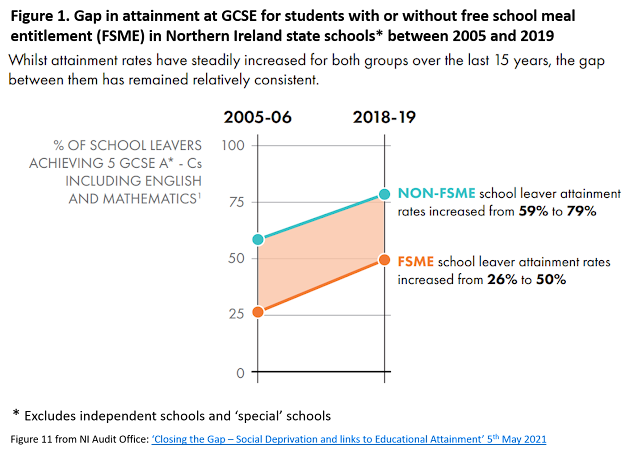 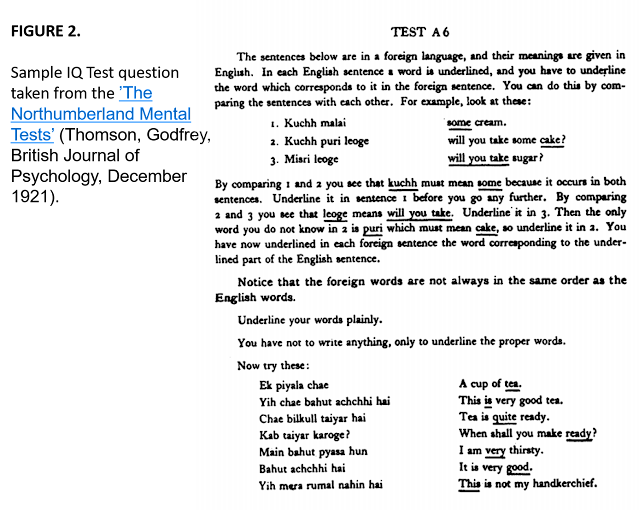 Thompson himself was aware of the limitations and acknowledged them in a comprehensive text based upon his lectures, 'Instinct, Intelligence and Character', published in 1924. He accepted that his study might have been affected by some preselection in schools “It is true also that the 3,000 children tested at the time included a large proportion who were put forward by their headmasters as candidates for scholarships”. Such scholarships enabled students to continue their education beyond the school leaving age of 14 that existed at the time under the Fisher Education Act of 1918. Whilst referring to “that intelligence of a superior sort”, Thompson also acknowledges ‘The Influence of Schooling’ in a detailed treatise on the issue. Indeed, disentangling ‘native intelligence’ from educational attainment was a problem back then and he indicates that “Tests more independent of schooling, however, would be a great boon in doing Justice to children who have had different educational opportunities”. He goes onto say “But, indeed, it seems incredible that such great lack of schooling should not depress the intelligence”.
The simple fact is that the governments in all jurisdictions in the UK provide some additional funding for schools based upon the numbers of disadvantaged students they take in. The problem is that the gap in attainment is persisting. Opponents will seize on this to cut the funding that is seen as ineffective. Using the argument that less advantaged students lack intelligence, it could be concluded naïvely that more funding will not work. Yet it appears that overall cuts in school budgets are being plugged by funding intended for their disadvantaged students. This means that they are simply treading water, and the gap will widen further if the funding is cut. A wider social inequality lies at the root of a problem that schools cannot fix with measures taken inside the school gates alone. There is a lot more to be done.
Mike Larkin, retired from Queen's University Belfast after 37 years teaching Microbiology, Biochemistry and Genetics. He has served on the Senate and Finance and Planning committee of a Russell Group University.