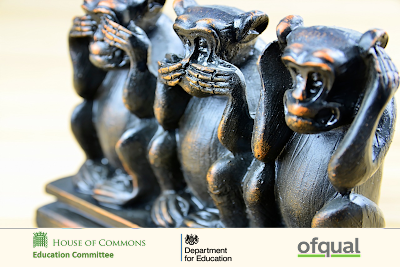 This week saw more grief added to the sorry tale of how students have been badly let down by ‘government’ in the widest sense. The Education Secretary, Gavin Williamson was brought before the Education Committee to explore his role, and that of the Department for Education, in the examination debacle this summer. It was not searching enough as each played their role as one of the three ‘wise monkeys’. Williamson’s crocodile tears, shed for the fate of ‘disadvantaged’ students, did not convince anyone they were a concern at the outset. Some will be challenging the veracity of his memory on this particular point.
Meanwhile the Ofqual Board met on Wednesday. Glenys Stacey, Acting Chief Regulator, had promised the Education Committee in a letter on the 8th September that they would publish all their minutes going back to September 2019.
“I also wanted to confirm our plans to publish minutes of Ofqual Board meetings. We will publish minutes up to March 2020 shortly. We intend to agree all minutes up to the end of August 2020 at our Board meeting on 16 September 2020 and will publish shortly after that meeting.”
As off today, there has been no such undertaking and they have also missed responding in time to the TEFS Freedom of Information request of 19th August 2020. The deadline was today (See TEFS 11th September 2020 ‘Ofqual and the finger of blame’)
More Education Committee evidence gathering.
On Wednesday, the Education committee took evidence from the Education Secretary, Gavin Williamson, and two officials from the Department for Education (DfE). It fell well short of what was expected and turned out to be stupendously flat. So much so, that I managed to listen in whilst constructing an IKEA Lommarp cabinet in my kitchen at the same time. Painstakingly accurate – but numbingly boring.
Williamson’s evidence was also in the context of two reports this week on the disadvantage disparities across the UK. One from the Social Mobility Commission on Tuesday, ‘The long shadow of deprivation Differences in opportunities across England’, the other today from Institute of Fiscal studies, ‘2020 annual report on education spending in England: schools’ expose stark realities. An overall decline in funding for schools is evident since 2010 and “Schools serving more deprived pupils in England have already seen the largest falls in spending per pupil over the last decade” . For many, the idea of social mobility is a myth as “Where you grow up matters”. The wilful detachment of ‘government’ from the realities of their actions is becoming more alarming. Some are saying they are incompetent. But their actions look more deliberate than most people give them credit.
What was not asked and imaginative responses.
It was disappointing since I emerged from the ordeal one cabinet up but none the wiser. What was the role of No10, the Prime Minister and the whole cabinet on making such a decision this summer? After all, cancelling exams and moving to calculated grades was a momentous step to take. Was it approved by No10? I guess we may never know as Williamson become the fall-guy. He protested a lot about his concerns for disadvantaged students. His argument was that teacher predicted grates would work against such students who were not expected to do well. How this argument then makes it alright to do something far worse seemed to elude him.
Crocodile tears for the disadvantaged.
Williamson does not come from a well-heeled background. A Social Sciences graduate from the University of Bradford, he attended a comprehensive school in Yorkshire. Yet his fast rise in the Conservative Party suggests he may have ‘gone native’. One of his answers stood out from the rest of the hearing and some might say he was a bit imaginative with the truth. When asked about grade inflation by a lively Ian Mearns, he responded with this.
The full proceedings are available at the Education Committee www site. Yes, you heard it right.
“If you go back to my correspondence and direction letter on the 31st March it did rightly highlight the importance of – ah, you know – sort of children from disadvantaged and ethnic minority backgrounds. It also highlighted the importance of standards as well.”


I have read the letter three more times (DIRECTION UNDER S 129(6) OF THE APPRENTICESHIPS, SKILLS,CHILDREN AND LEARNING ACT 2009) and it does not mention disadvantaged or BAME students, or indeed make any concession to the point he had made about them. Its only advice was on standards with,


“In order to mitigate the risk to standards as far as possible, the approach should be standardised across centres. Ofqual should also mandate the method of calculating final grades based on the evidence provided for each student. Ofqual should ensure, as far as is possible, that qualification standards are maintained and the distribution of grades follows a similar profile to that in previous years.”


Only three wise monkeys. What happened to the fourth one?


I was struck by the idea of the ‘three wise monkeys’ as Williamson droned on about disadvantaged students. The image goes back to a 17th-century carving in the Shinto Tōshō-gū shrine at Nikkō in Japan. But the idea itself has much more ancient roots that probably originated with the sayings found in the Analects of Confucius from China that could be as old as 479 BC. When asked about achieving ‘perfect virtue’ by Yen Yüan, the Master argued that a “return to propriety, is perfect virtue”. The notion of “propriety” infiltrates most of Confucian thinking and it holds that to achieve such virtue we must, "Look not at what is contrary to propriety; listen not to what is contrary to propriety; speak not what is contrary to propriety" (Analects of Confucius: Lunyu XII. 1. 294). This has been passed down the centuries and indoctrinated those who boast of a ‘classical education’. However, it seems somewhere along the way the fourth monkey was made redundant. Confucius also said that we should “Make no movement which is contrary to propriety". This makes the fourth monkey ‘do no evil’. Even Thomas Paine, a key thinker behind American Independence and author of ‘Common Sense’ and ‘The Age of Reason’ was influenced. Again, he was mindful of the fourth monkey with his reasoning. On the Federalist government he advised in 1802,
“I recommend to them the observance of a commandment that existed before either Christian or Jew existed. Thou shalt make a covenant with thy senses. With thine eye, that it beholds no evil. With thine ear, that it hear no evil. With thy tongue, that it speak no evil. With thy hands that they cemmit no evils. If the Federalists will follow this commandment, they will leave off lying”. (‘To the Citizens of The United States – Letter the Second’ National Intelligencer, Washington, DC, November 22nd 1802).

Williamson would do well to heed such advice and be mindful of the veracity of his evidence and the extraordinary capacity of the government to do it all wrong.