Ofqual and the finger of blame 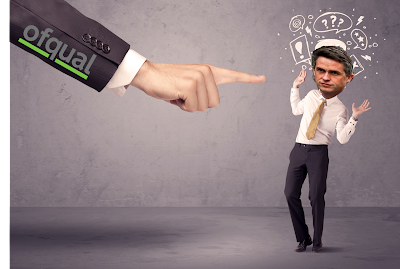 This week confirmed beyond any doubt that Ofqual is pointing the finger of blame for the public examinations chaos this summer firmly at the government and its ministers. The positions of Schools Minister, Nick Gibb and Education Secretary, Gavin Williamson must be on the line. When Williamson is confronted by the Education Committee next week, like Momus he may find his mask has slipped and cannot lay blame anywhere else. He might be meeting his Nemesis and find he is expelled from his lofty position.

On Wednesday morning, Education Secretary, Gavin Williamson, Education Permanent Secretary, Susan Acland-Hood, and Director for Qualifications, Michelle Dyson, will be called to account by the Education Committee. With the redoubtable Robert Halfon in the chair, they will face a hard time. This is because Halfon and his colleagues will be armed with more documentary evidence from Ofqual and others that look bad for both ministers. All of the correspondence so far is listed on the Committee‘s www site. A long letter (Supplementary letter from Ofqual following their appearance before the Committee on 2 September 2020) from the new Ofqual Acting Chief Regulator, Glenys Stacey on Tuesday that set out a timeline and advice Ofqual gave to the minsters and the Department of Education (DfE). This was accompanied by the release of an ‘Official Sensitive’ report dated 16th March 2020 ‘Summer 2020 GCSE and A/AS level exam series Contingency planning for Covid-19 – options and risks’.

Ofqual’s, position is that the minutes of all the many meetings with the DfE are held by the DfE. This means that Williamson and his department will have to produce the minutes to account for the decisions made. This is key evidence.

In another submission to the committee, Cambridge Assessment described their role in the process and provided a more detailed timeline in ‘Timeline and analysis – GCSEs and A Levels in Summer 2020 2 nd Submission from Cambridge Assessment – September 2020’. They paint a less than flattering picture of Ofqual with “Ultimately, Ofqual developed a model based on a wide range of input and we were not asked to review or scrutinise its final form”. There is no way Williamson can wriggle out of “30 July Cambridge Assessment informs Secretary of State’s office about the existence of outlier students and the possibility of low accuracy in calculated grades”. He was clearly made aware of serious issues well before he said he was.

There is now a lot of pressure bearing down on the reasoning behind what was clearly a political decision. At any other time, both ministers would have resigned their positions by now. I am sure some will be taking bets on Williamson and Gibb not making it as far as Wednesday.

Ofqual Board meetings and a Freedom of Information request.

Unfortunately, Halfon and colleagues will not have seen Ofqual’s Board minutes by Wednesday. The Ofqual letter to Halfon on Tuesday explained why with “I also wanted to confirm our plans to publish minutes of Ofqual Board meetings. We will publish minutes up to March 2020 shortly. We intend to agree all minutes up to the end of August 2020 at our Board meeting on 16 September 2020 and will publish shortly after that meeting”. This is interesting timing. TEFS made a Freedom of Information request on the 19th of August to see minutes of their Board meetings since there are no minutes posted on their www site since September 2019. The 20-working day period to reply expires on 17th September. They have little choice about releasing all minutes.

Warm up debate in parliament.

All this activity coincided with a debate in parliament on Wednesday concerning the ‘Role of Ministers in the Awarding of Qualifications this Summer’. This was an Opposition Day Debate led by the Shadow Education Secretary, Kate Green and is available on ParliamentLiveTV and the Hansard transcript. The responses from Williamson and Gibb did not offer much more insight other than giving Williamson a bit of a ‘dry run’ before the Education Committee next week. He must expect a much more forensic examination of what went on coming his way.

Some observations from the Ofqual report of the 16th March 2020.

A few things that stand out for TEFS are hiding in the report that explains what was happening at the time. There is no doubt that Ofqual were very worried about moving to a system of estimating grades. ‘Option C: Issue grades based on teacher estimates which have been statistically moderated at a centre / cohort level to bring them into line with previous years’ results’ was the one least favoured and, in retrospect, they may wish the had not mentioned it as an option at the time. However, when the government decided to go down this route, they were aware that “The credibility of any estimated grades may be questioned, particularly in cases where students’ grades are much worse (or better) than expected” and that “While it may be possible to achieve an overall statistical fit between the estimated grade, rank order and other evidence, individual students may feel that their final grade is not that which they should be awarded. Ofqual and exam boards may be subject to legal challenge over this approach”.

By saying “we will also need to put in place arrangements so that, if necessary, we can move to option C in response to medical and scientific advice” it is admitted that no existing contingency plans were in place in the event of a situation such as this arising. This could be seen as part of a business continuity plan that every organisation should have in place ,but Ofqual failed to do this.

The situation regarding BTEC qualifications is also clearer. The initial lack of information about the arrangements for BTEC examinations is clearly explained by the very low priority Ofqual put on them. TEFS reported its concerns on the 5th of April in ‘To BTEC or not to BTEC, that is the question’ as affected students were very distressed about not knowing what was going on. There are tens of thousands of students reliant upon BTEC grades to get to University. Yet, although Ofqual were aware of this, they deliberately placed these qualifications very low on their priorities. This position persisted right to the end with the adjusted BTEC results being the last to emerge in August.

This sorry tale is not over yet. Serious questions have been raised about the inherent unfairness and inaccuracies in the system at the best of times. COVID-19 simply magnified them so that they could be seen more clearly. With time marching on, there needs to be a new plan in place for next summer and beyond. More course work would help assess students’ abilities, but we will need to go much further. TEFS (4th September 2020) suggested that “Conflating education with testing too often leads to confusion about what should dominate, a sound education or the test” in ‘The Ofqual University Challenge: Nobody expects the Spanish Inquisition’. There are many other options for university selection that would challenge the current system. It is time to start considering these in the light of what has been revealed.