SQA cements the inequality ‘goal posts’ into the ground: UPDATE 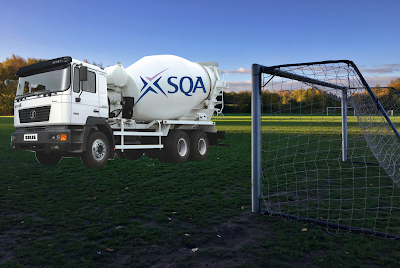 
Disquiet about the Scottish Exam results is rumbling on further today. With the results in England, Wales and Northern Ireland out next week, it seems certain that a similar pattern will emerge. The Scotland experience may be a dry run for the rest of the UK, this time bigger and possibly worse.

Some students in Scotland are posting on Twitter complaints that they had results downgraded despite preliminary exam results predicting an A grade. One obtained a ‘no award' grade after getting an A in the preliminaries. It seems the SQA are correct in allowing free appeals and these must be assessed through evidence from schools as soon as possible to ensure university access is timely. There will be multiple appeals and too may are left hanging now. Losing a university place to only find there was an error would be tragic. Indeed, the number of errors could be much greater than is being admitted. Identifying a large drop from a predicted strong grade in one case tends to suggest a mistake such a spreadsheet frameshift. This would amplify one small slip up  across a whole cohort in a random fashion. This is of course the nightmare scenario that everyone fears in deploying any large database. But errors in grades bedevil the system. Dennis Sherwood observed last year in an article for the Higher Education Policy Institute (HEPI) how ‘1 school exam grade in 4 is wrong. Does this matter?'. This is disturbing and the new system in place in 2020 might simply have invented new types of error. If there are systematic mistakes, then SQA must come clean and rectify them fast.

David Kernohan of WONKHE has today produced an excellent analysis of the Scottish results with ‘Why are SQA results askew?’. It seems there is agreement that “historic under-performance seems to have dragged calculated grades down”. Indeed, this is the obvious conclusion as the 2020 exercise has cemented long standing inequalities in place. Kernohan does avoid going further with “whether such exams are in fact a great way of testing how middle class you are as an exercise for the reader (though the data does point to this as a possible explanation)". I am not so reticent; I think it is almost certainly the only explanation.


Original posting 4th August 2020.
The release of the exam results in Scotland today has caused a major storm in the media north of the border. The main observation is that the Scottish Qualifications Authority (SQA) has downgraded most of the predicted grades made by the schools and colleges. Perhaps this was not so unexpected as teachers tried to get the best for their students. But what has caused the storm is the simple fact that the down grading has hit hardest in schools in the most disadvantaged areas. This has painfully opened an old wound of ingrained disadvantage amongst school students. It took the COVID-19 crisis to bring this into the light of day. It appears that SQA decided not to move the goalposts of social inequality. Instead, it decided to cement them into the ground for good. This will not go away and expect a fierce backlash from those feeling they have been let down. We await the results of similar examinations in England, Wales and Northern Ireland next week fearing the same pattern will emerge.


There has been genuine surprise and outrage after the release of the Scottish exam results today. Whilst many students are relieved that they have achieved enough to proceed onto Highers, Further Education or Higher Education as planned, others are left somewhat stunned. The First Minister, Nicola Sturgeon, put on a brave face and was quoted as saying, "I would love to be in the position of standing here credibly saying that 85% of the 20% in the most deprived areas had passed Higher….. But given that it was 65% last year, that would raise a real credibility issue." This seemed like a poor excuse for a classic ‘own goal’. But the simple reason is that the system is badly skewed in favour of those with more resources at home and in school. This has been the case for many years, but its seems clearer today what it means.


The table below is clipped form the SQA report released today ‘Alternative Certification Model: Equality Impact Assessment’. Please note that these details are not yet released on their www site as statistical data ‘Statistics 2020’. It will be of greater interest to look more fully at the underlying process and trends when they emerge later in September. 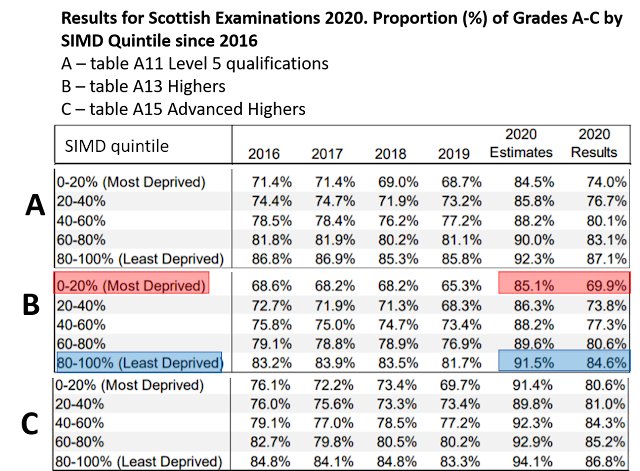 The schools are divided into Scottish Index of Multiple Deprication (SIMD) geographical areas. This is done as quintiles with the least advantaged in the 0-20% range and the most advantaged in the 80-100% range. It is easy to see on the government map that many of the most deprived areas are in inner cities and towns with few resources and high unemployment. Now it seems that students on an upward trajectory from such areas might see much more clearly that the school they are lumbered with has been penalised along with themselves.

Perhaps it is little surprise that teachers and schools decided to fall on the side of caution and predict the grades they thought their students deserved. This might have been more in hope than expectation as they took a massive responsibility onto their shoulders. However, they must have expected the results to be downgraded based on the previous performance of the school in recent years. They will be shaking their heads at the injustice inflicted on the students this year. Yet the inequalities are now in full view and are so obvious that something must be done to address them.


The iniquity of students at schools from the most disadvantage areas having such a large amount stripped from their predicted results adds to the sense that things cannot be right. This is a watershed moment as the idea of universities using ‘contextualised’ admissions criteria will surely take hold. This will not be enough as students await the reaction of universities. The inequalities must instead be rooted out at source.


There is one saving grace that the government had to concede on. No cost appeals will be allowed as long as they are backed by their school. It might work for a few.


The BBC Scotland report today noted that “Aiden from Falkirk said he had been predicted to get three As and a B in his Highers but was given a B and 3Cs, and has been encouraged by his teachers to appeal”. There will be many ‘Aidens’ across Scotland thinking exactly the same thing. We wish him and his teachers well.