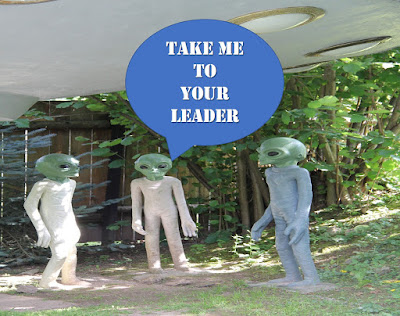 Even if aliens landed in England overnight, the first encounter might have gone unnoticed as the results of the election came in. What do we say to the advanced guard of a more advanced civilisation when they ask “take me to your leader”? Many of us might decide that it is not a good idea to seek out our leaders. Instead, we should carefully reflect upon what the alien visitors might make of us. Then extend this thinking to the attitude of the rest of our planet toward our position.

If aliens had landed, they would probably be detained in one of our immigration processing centres by now while someone decided what to do with them. Meanwhile the alien visitors would reflect upon what they had researched and the wisdom of travelling here at all. They would reach the conclusion that the UK was incapable of achieving a trade deal with their neighbours, never mind the intergalactic deal they were proposing. They would see that our leaders seem to be chosen on the basis of popularity and not on their honesty or capability.

Facts are blurred into the background as people are misled. The unequal society we display to them is dominated by those with more resources and not those with ability. The leader that they seek is part of an ’elite’ clique that has arisen from the most privileged in a society that seems happy to elect them. More surprising would be the realisation that political leadership on science and technology is in the hands of a Minister of State for Universities, Science, Research and Innovation who is an expert in medieval history. With the environment on earth degrading fast, the scientific political leadership would seem to be lacking understanding and a sense of urgency as the crisis deepens.

The simple answer is that there will be no change. The conservative manifesto made no promises of change on university and student finance other than a vague promise of a review. The conclusions of the Augar report earlier this year have been lost in the long grass. The prospect of Brexit has frozen universities into complete stasis as they cannot effectively plan ahead. With no real idea of how research funding will develop in the absence of the EU influence, they sit and wait. But today they know that Brexit is a reality and no deal is the outcome they must prepare for. The impact on international collaborations will be profound and they will have to lobby hard to regain their positions. It is time that universities provided more foresight and leadership in what is becoming a very deep crisis. Unfortunately, they will most likely seek further fee rises to compensate for the loss of EU research income.

What can students expect? Equality, fairness?

The simple answer is again, more of the same. However, they will also see an escalation in the numbers of temporary contract lecturers teaching them. Indeed, the privatisation of all public services will pile up around them. As they prepare for the world of work, they will initially fail to see the erosion of employee protections creeping up behind. By the time they realise, it will be too late. Protections gained by generations before them will disappear as we move toward a USA system of ‘hire and fire’ mentality. The idea of protected pensions will also disappear as they invest in precarious schemes that line the pockets of the fund managers. Worse, they will realise that their unsecured government loans for university education were being creamed off as profit by the private sector and backed by their repayments and tax. The unsecured loan debt in the UK is rising fast with student loans leading the way.

The idea that there will be a backlash against the newly elected government will take hold over the next five years. Most young people did not support Brexit and are not readily disposed to supporting the Conservatives and their pro-Brexit stance. This discontent will expand as more young people come onto the electoral register. The idea of fairness and equality will expand as they realise that widening participation is an illusion created by the government.

Another stark fact will emerge quickly. The ’first past the post’ system skews the perception of support for Brexit that is also an illusion. The majority Conservative government today was elected by 43.6% of the electorate. When combined with the pro-Brexit vote for the Brexit party, it comes to just short of 46%. In contrast, the combined Labour, Liberal Democrat, Green Party and Scottish Nationalist Party vote for Remain/second referendum comes to over 50%. Calls for a second referendum will continue with young people seeking wider support for their position.

One nation government is a dead concept.

The results in Scotland revealed a wide rift between the Scottish people and the rest of the UK. Brexit will lead to a second independence referendum with the most likely outcome being a separate Scotland. The current divergence in Higher Education will widen further. But we should beware. Nationalism is a powerful force that should be contained. Instead, it will lead to more xenophobia in both England and Scotland as it rises. Meanwhile a lone piper can be heard faintly in the hills around Edinburgh sounding the lament for the last outpost of Labour.


Then raise the scarlet standard high
Beneath its folds we'll live and die
Though cowards flinch and traitors sneer
We'll keep the red flag flying here...…………………………………….