This week brought about the release of the 2019 edition of the Organisation for Economic Co-operation and Development (OECD) overview ‘Education at a Glance: OECD Indicators 2019’. It was hosted this year in London by the Higher Education Policy Institute rather than the similarly named Education Policy Institute as in previous years. The UK is holding its own as Higher Education expands in other countries. However, we must not become complacent.

Headquartered in Paris, the OECD produces, amongst its vast range of economic analyses, a valuable overview of education provision across thirty six countries with well-developed systems of education. The reviews are valuable to policy makers in the UK in that they make comparisons with similar countries and place the UK in relation to EU and overall OECD averages. This grounds us well in realism concerning global trends and economic progress elsewhere.

What does the OECD report tell us?

The report itself is 497 pages and contains a vast range of comparative figures and tables. In relation to access to education, Chapter B. 'Access to education, participation and progress' contains the most data of direct interest to TEFS. HEPI provides a very short synopsis points to take from the report with ‘15 things worth glancing at in the new Education at a Glance’.

A general take on the data is that Higher Education has expanded a great deal across the countries in the study in the last 10 years. This is certainly the case in the UK where now almost 50% of the population from 25 to 34 years old have benefitted from tertiary education. However, in relative terms the UK has dropped in ranking from 6th position to 9th position in the intervening years. This trend is worrying and emphasises that there should be no room for complacency.

What OECD does not tell us.

It is important to note that the OECD report covers the period up to 2018 and much of the report is based on 2016/2017 data. But, with major political seismic movements associated with Brexit ongoing, it would be foolhardy to be complacent. The HEPI overview makes the point in ‘15 things worth glancing at in the new Education at a Glance’ that “The problem of young people doing nothing (the so-called NEETs – not in education, employment or training) is now ‘pretty much under control’”. Indeed the OECD data, based on 2017 figures, shows that the UK does very well on this measure. Those that have tertiary education are much less likely to be NEETs (neither employed nor in education or training) with the figure well below 10%. However, there is no room for complacency in this respect. The OECD data also shows that there is a very high percentage of those with no upper secondary or tertiary education that are NEET and the UK does not fare so well in this respect. The UK Office for National Statistics (ONS) data for 2019 (Young people not in education, employment or training (NEET), UK: August 2019) reveals an overall upward trend in NEETS since it seems to bottom out in 2016. Figure 1 shows that there is a persistent problem that is probably not going away and may be getting worse. 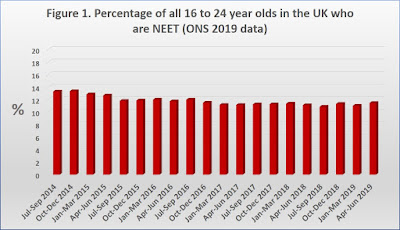 HEPI also correctly states that “Relative to other countries with high private spending on higher education (such as Japan and the US), our university system performs better on access”. However, not all countries have high spending on private universities. The UK has the highest spend of the G7 countries on Higher Education but almost all UK universities are categorised by OECD as ‘Government dependent private’ universities. The UK system could be equally classed as ‘quasi private’. This tends to hide the simple fact that much of the income of universities in the UK comes from fees that are serviced by long term and crippling loans. The effect of this on the emerging economy will surely become apparent when another generation of students comes along in time.

Whilst access to university appears to be well established in the UK, the OECD report does not indicate how fair this might be. The suspicion is that access is more available to those with strong family finances. Indeed there are many indicators that suggest this is the case. An earlier report by the OECD from April this year ‘How does socio-economic status influence entry into tertiary education?’ (EDUCATION INDICATORS IN FOCUS APRIL 2019) might give more clues to the factors involved. However, the UK does not feature in many of their comparators within the report and this ‘oversight’ should be rectified to reveal our true position.

Good news for the UK and its reputation.

The OECD report also reveals that the UK universities do well with respect to attracting foreign students. This reflects a great deal of resilience in our system since the restrictive changes inflicted on such students by the government in the last few years. It is therefore exceptionally good news that the government has just performed a handbrake turn and will allow foreign graduates to remain in the UK for two years after graduating.

Further good news has remained hidden from the mainstream press. However, in terms of access for many hard pressed and disadvantaged students, it is a major breakthrough that UCAS will be including ‘estranged students’ in their application forms this year. They have teamed up with Standalone in an initiative ‘Going it alone? Support for estranged students in higher education’. Credit must go to the Standalone charity for making this happen. There is a long way to go in ensuring parity of access in the UK but this will have a major impact.
Mike Larkin, retired from Queen's University Belfast after 37 years  teaching Microbiology, Biochemistry and Genetics.