In the sweltering heat of the meltdown of our parliamentary democracy this week, there were several high profile resignations and disgraceful expulsions of long-standing members of parliament. This included ministers and former ministers discarded for their genuine views on Brexit. The biggest shock came when the Minister of State for Universities, Science, Research and Innovation, Jo Johnson, decided he could take no more and resigned as minister and MP to avoid the ignominy of being thrown out by his brother. This naturally dominated media coverage. Yet the loss of another establishment Oxford educated figure will be of little consequence in the long run. A resignation far more profound and far-reaching happened with the loss of Justine Greening from parliament. She should consider re-emerging on the side of another party more suited to her aims and reignite her challenge to the so called ‘elite’ establishment that barely passes for representational government.

She too avoided the sack by walking out. This is a very sad loss as she was one of the strongest emerging shoots of genuine representation for the people. She had held the pivotal position as Secretary of State for Education until she was pushed out in 2018. But now she is completely removed from a position of influence. This will emerge in time as one of the most profound losses of representation and influence and will set back generations of people seeking the holy grail of ‘social mobility’.

Why resign and leave Parliament?

It seems that Justine Greening had come to the conclusion that she could no longer deal with the conflicting party interest regarding Brexit and her constituency wishes. This is consistent with the views of many of our MPs and her colleagues and comes as little surprise. But more profound is her observation in her resignation letter (here in full) that she “can achieve more positive change on the ground by working outside Parliament on this very practical issue”. 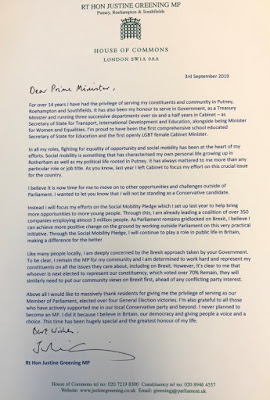 This relates to her determination to lead, and press on with, her ‘Social Mobility Pledge’ for all employers to follow (See more detail in TEFS 30th March 2018 ‘Social Mobility and the Economy: Another debate, plea and a pledge.’) Her aim is to establish accredited employers that work with schools to improve access to jobs through better recruitment practices. She has consistently pressed for a fairer system that helps all students. Her decision this week, and her rare perspective in a Conservative government, serves to illustrate the almost total social blindness of her colleagues. Government urgently needs more like her to set the agenda for a fairer future. It is shocking that this is not part of existing policy and is instead initiated outside of a government that is now no longer interested in the idea of promoting ‘Social Mobility’. Her leaving will greatly diminish her considerable influence.

Not the first time.

Justine Greening was pushed from her position as the Secretary of State for Education early in 2018. This was considered a major setback for the cause of students from less advantaged backgrounds. Her replacement, Damian Hinds, is the product of an independent school and is an Oxford PPE graduate. He could not be more different in experience or outlook. He immediately did what the current establishment seems to do when it cannot effectively govern. He set up a review on funding post-18 education under Philip Augar. It seems that the Augar review conclusions did not go down well with the universities, who resented the prospect of getting less cash, or the current establishment intent on strangling the government. Augar had not 'toed' the establishment line as expected; despite constant leaks and ministerial interfering. It seems that Jo Johnson stayed just long enough in government as the Minister of State for Universities, Science, Research and Innovation so he could finish off the Augar review and leave it to 'die in a ditch'. The spending review announced this week failed to mention Augar or University fees – job done #overandout.

The underlying reason for the ousting of Justine Greening emerged earlier this year, a year after she left the Department of Education, when she revealed the cause. In an interview with the BBC in January, she said that she was well advanced with a plan to scrap tuition fees (‘Justine Greening wanted to scrap tuition fees.’ BBC News 23 January 2019). This is a manifesto pledge from the Labour Party and she was operating from within the Conservative establishment to deliver it whilst also working out how to make up the funding for universities. She indicated this might be done through a graduate contribution scheme. There would be no fees and consequently no loans. Instead, graduates would pay through a progressive taxation scheme similar to a National Insurance deduction linked to pay. In the context of this and Brexit, she says that “I think for British politics, we've got to ask ourselves some difficult questions about why party politics seemingly cannot rise to the challenge of delivering on long-term problems”. She was right.

Who is Justine Greening and what is being lost?

She was the Conservative Member of Parliament for Putney in London since 2005. However, her background challenged our perceptions of what we expect to see in a Conservative figure. Born in 1969, the 50 year old Greening attended Oakwood Comprehensive School in her home town of Rotherham between 1981 and 1988. Up to 1975 it was Secondary Technical School that focussed on mechanical, scientific and engineering skills to serve industry and science. This would have been in the context of an industrial steel town. The politics of the time surely moulded her outlook and view. She is a product of more egalitarian, pre-Dearing times and benefitted from a free university education and no loan burden to hold her back. She graduated from Southampton University in Business Economics and Accounting and then with an MBA from the London Business School before escaping to the finance industry.

In a speech in January 2017 at Price Waterhouse Coopers, sponsored by the Sutton Trust (‘Justine Greening: education at the core of social mobility’), she was open in describing her background and her first job in Morrisons when she was studying for her A-Levels. She pressed on with the Social Mobility agenda that she had initiated later in 2017 with the policy paper ‘Improving social mobility through education’.

After falling out of favour with the Conservative ‘middle class’ establishment she pushed on with a commons motion in March 2018 ‘That this House has considered social mobility and the economy’. She described a situation that is very familiar to me coming from a working class family in the industrial City of Coventry in the 1960s and 1970s. The precarious nature of income, and what was called home, the feeling of wanting fairness and no more and the determination to get out and do better. She told those present in the Commons Chamber:

“My father and grandfather worked in the steel industry. My father would probably have benefited from the national minimum wage being in place and he spent time unemployed, so I know what it is like to grow up in a family on benefits. I am sure that many young people who are starting out today feel the same as I did: I never wanted to have extra advantages over my peers; I just wanted to have the same opportunities as everyone else— a level playing field.”

This encapsulates what many working families in her situation want their government to deliver. The economic deficit in the country that results from side-lining talented people because of having a less advantaged background is a disgrace that has gone on for too long. The increasingly militant ignorance and behaviour of the current Conservative party shows that this will not be reversed in this government. The loss of Justine Greening from Parliament adds to this feeling of helplessness and she should reconsider and stand again for another party that offers a more comfortable home for her.