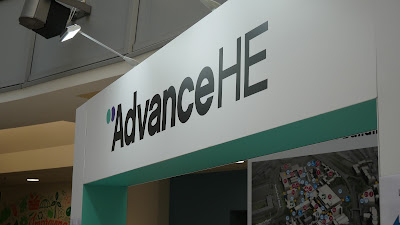 The annual Advance HE meeting in Newcastle this week highlighted many innovations and challenges in Higher Education. But the events added to a sense of social myopia. The idea of ‘Excellence without inclusivity is not excellence’ is a sound one. But at times when looking around the room it looked like the ‘socially blind’ leading the ‘socially blind’. Add to this a pervasive feeling that many university teachers do not consider any of the valid points and concerns raised in this limited forum and there is a sense that there is a very long way to go.

The last few days has seen that annual Advance HE Teaching and Learning Conference at the impressive Northumbria University Business and Law School in Newcastle. The main theme of the conference was ‘Teaching in the Spotlight: Innovation for teaching excellence’. Indeed, it lived up to this billing with three packed days of parallel sessions covering teaching innovations from Arts and Humanities, Social Sciences to STEM and Health and Social Care.

The second day provided the most interest in terms of the TEFS agenda.  The general theme of ‘Sector Priorities’ can cover a multitude of sins, but equality and inclusivity emerged in several sessions. The keynote lecture at the outset laid down a provocative challenge after an inadvertent faux pas that provided an ironic backdrop. Alison Johns, CEO of Advance HE, dispensed with her microphone and asked the audience of around 400 people if they could all hear her. In a new building, with facilities that could have won an award for inclusiveness for all disabilities, this was unprofessional and astounding to the professional audience. The irony was that she was introducing Joshua Sanderson-Kirk who was to challenge us with ‘Excellence without inclusivity is not excellence’. I am sure I was not the only one who had to refrain from calling out ‘pardon’ and there was at least one delegate with a hearing aid that would have benefited from the hearing loop had he heard her in the first place. This was almost a perfect metaphor for the detached thinking of those leading in government and in their agencies. While BAME student attainment and inclusivity emerged as a big issue in the lecture, I am sure the four black men and one black woman in the largely white middle class audience must have thought we had somehow lost the plot. When told that the so-called black attainment gap is at 24%, they might be right and conclude that there is a very long way to go. Along the way to concluding that ‘inclusivity’ was key we learned that may providers are very poor on widening participation whilst others do the “heavy lifting”. The research driven Russell Group Universities do not come out well in this respect. The simple idea that resources and time are the key to success seemed elusive in the argument; regardless of background, gender, BAME or disability.

Pressure and stress and a stranglehold tightening on the whole system

However, this point did not bypass some delegates in later workshops. The inexorable rise in anxiety and mental health problems amongst students is a big challenge for those teaching in the front line. But even bigger for the students affected. Focus on a perception of the modern student lacking in ‘resilience’ might be better redirected to looking at the changed circumstances and causes.

Denise Meyer of the University of Portsmouth provided a timely insight into how to address the ‘anxiety’ epidemic in the classroom. The stress on staff is a real problem and the idea of ‘emotional regulation’ as a coping strategy seems sensible. The advice of ‘Stepchange’ on debt stress and mental health might be considered by students and staff alike. The alarming rise in anxiety amongst post-graduate students surfaced in her session and was reinforced later by Sophie Homer of the University of Plymouth. Her work funded by the Office for Students got closest to the core of the rising problems and ‘drop outs’. The pervasive ‘academic culture’ of stress and isolation was identified with ‘stress is normalised’. Her prize-winning research and workshops, funded by the OfS and designed to prevent mental health issues escalating, should be spread much further afield and into the top research laboratories. The advice from ‘Nobelist: work-life balance impossible for scholars in short term’ in Times Higher Education today illustrates how important this mission is in the face of dangerous advice.

The presentation by Susan Cooper of Plymouth Marjon University was the first time I have heard anyone acknowledge in a formal setting that ‘widening participation’ students have to overcome deficits in time and resources. Her work reveals a microcosm of a much wider problem of time poverty and finance and its impact upon achievement. We need much more consideration of this.

A workshop run by Neil Speirs of Edinburgh University addressed social class and related pedagogy. This is a very interesting idea and many teachers could benefit from its consideration. We were reminded that the ‘Equality Act’ doesn’t protect poor people with “tough luck if you’re poor”. His main thesis was that current practice amounted to ‘symbolic violence’ towards the working class and the poor. The pedagogical approaches used in many academic settings seems to reinforce the ‘middle class’ and privileged hegemony that pervades higher education. However, as a scientist it is hard to see this extending to teaching the “laws of thermodynamics” and other areas of science. Most staff have a ‘blind spot’ about the class divide as his exercises well illustrated. His practical solution is to provide more interdisciplinary teaching that encourages more input and thought from the students. Indeed, most science education is well advanced with this concept. But no doubt his assertion that it is sometimes seen as something done by “pedagogical rogues” holds in many instances.

The highlight of the conference is the annual debate that raises important issues in a more informal setting. The motion this year was ‘This house believes that the metrification of higher education is ruining the student experience’. Speaking in favour of the motion were Debbie McVittie, Editor of Wonk HE and Amaty Doku, former Vice-President for HU at the NUS. Diana Beech, advisor to the Minister for universities, science, research and innovation, and Joshua Sanderson-Kirk president of the University of Law student association drew the short straw in trying to defend the idea of ‘metrification’. The debaters were well prepared for a formal defence. However, it became confused when it emerged that no one had defined ‘metrification’ as an idea. Obviously use of data in planning for higher education was a given – so what the heck is ‘metrification’? The idea of it meaning the ‘ranking’ of anything that can be measured seemed palpable amongst the audience. The confusion became worse as none of the debaters actually defined ‘student experience’ with any degree of certainty.

Diana Beech scored a spectacular own goal by trying to defend REF as a good idea so everything could be measured to follow that ‘success’. This was the wrong audience. Many in the room dedicated to teaching had suffered at the hands of heavy-handed REF management in their institutions. Anyone who teaches students face-to-face in the front line knows that metrics and ranking have gone too far. They have been used to chastise staff rather than plan effectively. Managements hide in their bunkers looking at more and more data and try to devise cunning strategies at an institution level without discussion with their frontline staff. This has little to do with student experience and becomes a smokescreen to cover up deficiencies. Setting minimum standards for every university to achieve in terms of teaching and support is a simple solution. None of the debaters made the observation that government is ‘spinning’ the metrics output to try to make their policies look successful; despite only marginal improvements. Key data on widening access are very important – but it is hard to equate these data to the ‘student experience’; assuming it can be defined. One good student experience could easily be another’s nightmare depending upon circumstances. In the end, a principle of giving all individuals the same chance might be a better focus.