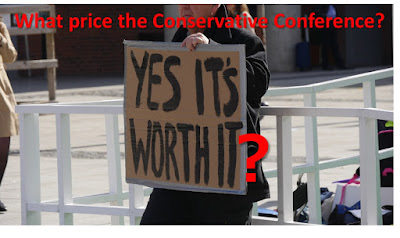 As the sitting Government, the Conservative party held their annual conference this week.  The cost for me to attend was too steep as were the hotels in Birmingham.  I noted that even for members it would have been £100s for a full member pass. The conference www site has been taken down and the Conservative HQs in both London and Edinburgh were unable to confirm the costs today. I attended the Labour Conference for £65 for a full pass – albeit one for a retired person (ordinary member passes were £110).
BREXIT, BREXIT, BREXIT.
The Conservatives were exercised with Brexit and this dominated the event in the press.  Dancing Queen, Theresa May (Independent School and Oxford Graduate) did her best to rally everyone around the camp fire whilst a full blown bush fire raged around her [1]. The incongruous sight of her dancing on stage took a while to sink in as the cringing subsided. She used the words of Robert Binyon from ‘For the Fallen’ written in 1914, when the horrors of war in Europe were first sinking in back then. “At the going down of the sun and in the morning, we will remember them”. The irony of this inappropriate reference in the midst of escalating political conflict with the EU over Brexit seemed to elude her. The UK stood by and defended democracy in Europe more than once and at terrible cost. We cannot and should not just walk away. She failed to add, “They went with songs to the battle, they were young….. They shall grow not old, as we that are left grow old.”
Paraphrasing the Labour slogan she called on “A party not for the few, not even for the many, but for everyone who is willing to work hard and do their best”. Not a party for all then. A qualified statement that must alienate those crushed by the terrible austerity and are still trying in vain.
Boris Johnson (Eton and Oxford Graduate) was the main comic turn at a fringe meeting [2]. After a ‘Benny Hill’ style run in a field, he rolled into Birmingham to a packed hall at the same time that the unfortunate Sajid Javid (Comprehensive School and Exeter Economics and Politics graduate), dubbed #uselessKhan by the incorrigible Johnson, was addressing a half empty main hall.  To senior Conservative figures in the front row Boris challenged, “If we cheat the electorate — and Chequers is a cheat — we will escalate the sense of mistrust”. Can it be escalated further? It seems he is, making a fine effort himself.
Education in the wings.
Education Secretary, Damian Hinds (Grammar School and Oxford PPE graduate) followed his opposite number in Labour with his speech on Education [3].  Like her, he shied away from universities and fees. It seems that there is no real forward plan as they wait for the now delayed Augar review to emerge. Also the ONS review of loans, timed for later this year that will no doubt upset the apple cart. His choice of reference to the past was not Abba or stirring poetry but Disraeli “It was the first One Nation Conservative, the original, Benjamin Disraeli who said "Upon the education of the people of this country, the fate of this country depends". He also boasted that, “And the gap has been narrowed. The gap between the rich and the poor in attainment has narrowed at every stage and every phase from nursery school to university entry.”  This seemed hard to grasp as a representation of reality.
Higher Educations on the fringes.
The Minister for Universities, Science, Research and Innovation, Sam Gyimah (Academy School and Oxford PPE graduate) popped up at several fringe meetings but on funding he remained reticent. ‘Waiting for Augar’ seems to be the only plan. To quote ‘Waiting for Godot’, “There’s man all over for you, blaming on his boots the faults of his feet.” Then there is the smoke from battleship HMS ‘ONS Review’ now visible on the horizon.
The Education Policy Institute hosted a meeting on ‘What do we need from universities?’ chaired by Natalie Perera (Education Policy Institute Director of a Multi-Academy Trust). The balanced views were provided in the blue corner by David Willetts (Independent School and Oxford PPE graduate) Professor Sir Chris Husbands (Former Grammar School, Sixth form College and Cambridge graduate) and Rachel Wolf (Former education adviser to the Prime Minister and Cambridge graduate). In the red corner was the redoubtable NUS president Shakira Martin (Lewisham and Southwark College) who deliberately did not bring her towel to throw in.
The Higher Education Policy Institute, with that partner University Partnerships Programme (a private provider of on-campus residential and academic accommodation infrastructure), hosted a roundtable. HEPI Director Nick Hillman (Cambridge graduate and former advisor to David Willetts) was joined by Neil Carmichael, former Chair of the Education Select Committee and Professor Robert Allison (Kings College London graduate and Vice-Chancellor at Loughborough University).
Representative of everyone who is willing to work hard?
The conference could hardly claim to offer much that was representative of ordinary people. Although the Labour Party conference (see TEFS September 28, 2018 last week [4]) showed that its perspective was skewed in some places, it made genuine efforts to address the pressing needs of a society that is slipping fast. The Conservative party perspective is almost skewed to total social blindness. The two cultures divide seems to be well embedded with the Conservative leadership and its blinkered  monoculture perspective is approaching a critical stage as technology advances. It is hard to see how solutions to economic challenges in a technical world, social problems and social mobility could emerge from its ranks.
Owen Jones of the Guardian has produced a quirky video [5] of the conference that seems to catch the mood overall.


[5] Owen Jones Owen Jones: my search for life at the Tory conference – video