Social Mobility and its Enemies – A review: Finding the Lost Souls. 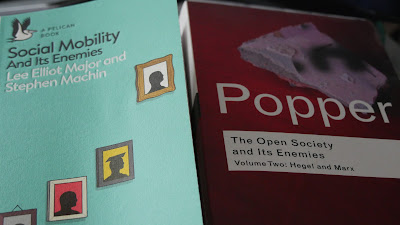 The eagerly awaited text ‘Social Mobility and its Enemies’ [1] was published on Thursday of last week. Like many others, I pre-ordered it on Amazon and it arrived the same day for reading to commence.
Using a title that paraphrased the iconic two volume text ‘The Open Society and its Enemies’ [2] written by Karl Popper in New Zealand during the destruction of Europe in World War 2, was perhaps a little presumptuous. Popper’s magnum opus is one of the most influential critical texts of the 20th Century and it shaped our new beginning. That one of the authors, Stephen Machin, is a Professor of Economics at the LSE, makes it no accidental choice of title. Popper arrived in the UK in 1946 to join the LSE.
The book offers an analysis of the persistent inequalities in our society and races through the various reasons in as much detail as the 259 pages will allow. The fact that the authors are compelled to do this in itself represents a failure to ensure fairness and government indifference – despite their ‘Social Mobility’ rhetoric. On the whole, the book offers, in one place, a comprehensive overview of the roots of the problem. It is highly valuable and should illuminate the situation for those interested in delving further into the issues. All politicians must read it.
Who are the enemies?
In his accompanying Blog [3], author Lee Elliot Major of the Sutton Trust stresses that “Sharp elbowed parents aren’t the only ones to blame for our rigid society”.  But admits that “I too am a parent who has paid private tutors to help my children”. Before listing the ten enemies of social mobility that are expanded upon in the book he notes that: “Yet we are all enemies of social mobility to some extent”.  There I have to differ but that would require a more extensive critique of who “we” are in this context. The enemies are postulated as:
Opportunity hoarders; Admissions cheats; Academic supremacists; Simplistic explanations; Elite education; Poor parenting; Unhealthy inequality; Bad employers; Tax evaders; Detached elites.
Citing ‘simplistic explanations’ runs the risk of falling into a trap of the authors own making. But they just about get away with it. As a scientist, it is necessary to consider the principle of ‘Occam’s Razor’ and seek the simplest explanation as the best one. Also, to consider what is missing in the equation. Firstly, access to resources seems to loom over all of the effects of the enemy’s actions with the exception of ‘simplistic explanations’. Access to one resource or other resource can be attributed to each ‘enemy’ and might even be quantifiable. That the establishment and government are not specifically cited as enemy agents, instead the elite education that spawns most of them, is perhaps a deliberate omission. However, it is government that controls most resources for disadvantaged groups and this is the main controlling point that needs more exploration.
The idea that there is a struggle between classes and an ’Educational Arms Race’ is explored. The inequality between low income and high income families in relation to offspring completing a university degree in part acknowledges that resource is a key factor. One figure illustrates this by comparison of data from 1981, 1983 and 2013.  However the citation has a flaw. The data from 2013 is from a very different data set to the others. The earlier data arises from the National Child Development study of 1958 and the 1970 British Cohort study and sources are cited. The 2013 data is calculated by the authors from the ‘Understanding Society’ data; a national study tracking 40,000 households in the UK over time that is not fully cited [4]. Despite this limitation, the outcome looks like little is improving. The presentation also uses percentage calculations for each income group. Thus, the shock effect of instead seeing the scale and vast numbers of people involved in being disadvantaged is lost.
Another way to look at the stark divide in access to Higher Education is to compare access to differently ranked universities and how it has changed in ten years and much of the lifetime of a government between 2007 and 2017 (See TEFS August 3rd 2018. Is the Government admitting to failure 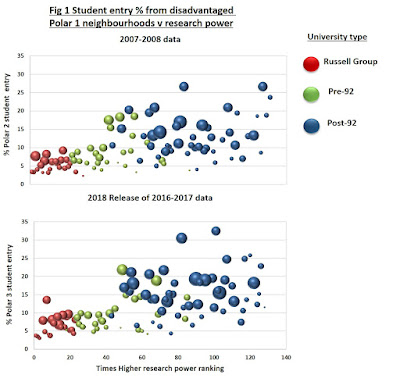 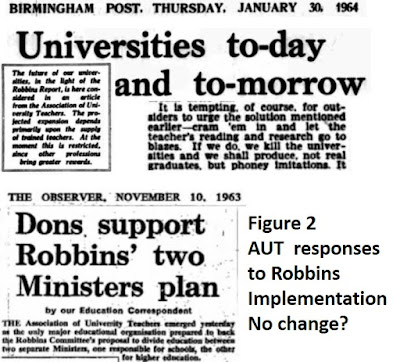 terminal arrogance towards their students.  However, it would be wrong to say this is anywhere near representative. The AUT stance of being more concerned about the expansion affecting recruitment of staff, standards and pressure on resources might reflect the position of a union who work for their staff and this was reported in the press at the time (see Fig 2). The authors might have tried to refer to the official submissions of the AUT to the Robbins Committee, even though it is hard to source online [10]. A later TEFS Blog will reassess Robbins and the Social Mobility agenda.
Conclusions and remedies.
The conclusion is simply that there are no simple remedies. However, there is a powerful plea for us to set things right in many different ways. There is no doubting the commitment of the authors to seeking improvements, but it is down to government to work on the problem. The treatise avoided political considerations, however, hopefully the reader might be thinking about this. Could it be that that government is indulging in social engineering? That is, deliberately cutting resources for the disadvantaged and pushing those that can afford it to spend more. Effectively creating a competitive market in people’s aspirations and success.
This means some travel first class or club class while the rest are crammed into coach class. Or perhaps worse, some travel in fully serviced and new private planes whilst the rest risk travel in one that is old and prone to failure; only club class get a parachute.
Education is indeed a “hard slog” and any assistance eases the burden incrementally. The authors state that:
“Two universal lessons emerge from the evidence on how to fulfil education’s promise as a lever of social mobility; always pursue quality over quantity and never compromise on costs”.
But this was the precise position of the AUT with respect to Robbins. Then, as now, it is of course the stuff of government.  Blaming better off parents as the “enemy” if they rise to this challenge for their own children is going too far. That parents are promoting their own children’s prospects is surely expected; that is how humans operate in nature. Given that this behaviour has not changed for a long time, and certainly not between 2013 and 2018 [11], then the enemy probably lies elsewhere. Sutton Trust have just published an important report, Parent Power [11] that is a signpost. It sets out simple recommendations for any government to adhere to and the sign points clearly at the real enemy.
All of the arguments seem to have an element of resources attached. Parents with sufficient funds hold their own resources and can deploy them selectively for their children. Conversely, government holds the bulk of the resources but doesn’t deploy them evenly on social support or education across the board. Even if simplicity is not recommended, a simple well-worn adage  applies: “follow the money”.

[2] The Open Society and its Enemies. Karl Popper 1945. One of the most influential books of the 20th Century. https://www.theguardian.com/books/2016/sep/26/100-best-nonfiction-books-karl-popper-open-society-its-enemies

[5] TEFS August 3rd 2018. Is the Government admitting to failure of its Social Mobility Measures? The progress in ten years.https://studentequality.tefs.info/2018/08/is-government-admitting-to-failure-of.html

[10] Written Evidence: Association of University Teachers: Some preliminary comments on supplementary earnings and on the review machinery proposals of the Robbins Report Reference: NICO 1/5 1963 Held by: The National Archives, Kew Committees and Commissions of Inquiry, 1961-68,1980. This record is held by Sheffield University Library. CSAC 113.4.86/C.290. Committees and Commissions of Inquiry, 1961-68, 1980.
Submissions to the Robbins Committee by others: Agricultural Research Council, Association of University Teachers, Committee of Vice-Chancellors and Principals of the Universities of the United Kingdom, The Institute of Physics and the Physical Society. Sheffield University Library, not available at The National Archives.