The increase in student numbers without a concomitant increase in staff resources has perhaps reached its inevitable limit. Students should expect more from their time at university. Those struggling to find the time to study should expect support to be readily available. They must be given equal chance to succeed in the best years of their lives taught by staff doing the best job in the world.

There has been much media attention devoted to an apparent rise in the number of students killing themselves in recent years and months [1]. This concern was compounded  further by reports of a lecturer who committed suicide back in February citing a heavy workload [2]. Times Higher Education reported the tragic news as a “wake up call on overworking in academia” [3]. It appeared that he had been expected to mark 418 examination scripts in 20 days. Sadly, this level of burden is not unusual in my experience and it often comes on top of other duties and expectations. There is now terrible disjunction between what management wants or expects  and  the reality in many organisations. It is indeed time to reflect. 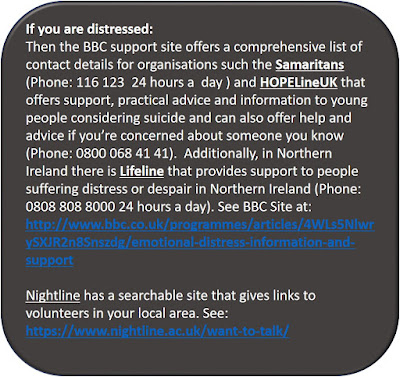 The media reports are always accompanied by advice and links for support for good reason. Any one feeling vulnerable – whether student or not – should always seek help. All universities and Colleges will have some support helplines and many are associated with the Nightline service that assists many distressed students. The panel here and below lists where help is to be found.

The tragic effects of a suicide stay with everyone close by for ever.

Any member of university staff that has helped a student who is struggling, and finds that the student has committed suicide, is left sitting in a hole of despair with no way to go back to try again. For me, the effects are still with me after many years. But the student at the time showed no signs of having a bigger problem than a concern about a course that could be easily resolved. Subsequently, everyone around has to cope somehow with the aftermath. It is not easy to move on, but doing so often involves a redoubling efforts to help future students in difficulty.


The lecturer who died in February of this year was Malcolm Anderson. He was from the Business School in Cardiff University and the inquest reported that he had fallen to his death from the building he worked in. It was also reported in the Coroners Court that he had a “rigorous” approach to work and a tendency to respond to questions from his students at any time of day or night.

Unfortunately, this was not the first time for this to happen at the same place.


During the examination period in May 2012 it was reported that a 23 year old student had also fallen to his death from the Cardiff University Business School Building [5]. Malcolm Anderson had worked at Cardiff for 30 years and, along with his colleagues, he must surely have been affected by the sad death of one of their students six years ago.

In 2016 The Independent reported that the suicide rates in universities had increased greatly since 2007 [5]. This surely should have set alarm bells ringing. The report cited data from the Office for National Statistics (ONS). However, this data covers England and Wales and includes all students in Higher and Further Education [6]. The figures cited perhaps give a false picture. The ONS note that: “Year-to-year differences in numbers of deaths may merely reflect change in the population of students across time as opposed to change in the risk of suicide”. 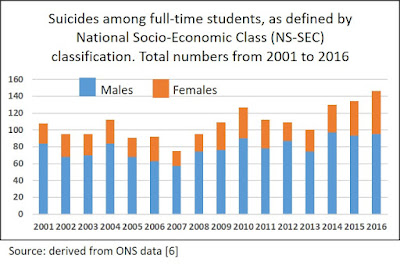 Indeed the total numbers each year fluctuate. Normalising against the total number of students in Higher Education has not been formally done in any official reports. More research and effort must be made to do this well.
However, correcting for the total number of students in HE and FE in 2016, suggests that the rate is around 6 per 100,000 students (some reports only take account of HE students). This is not a good way to make comparisons with the population as a whole but the question can be asked: Is this unusually high? If the age profiles of suicides is considered in figures in the UK from 2016, then this rate is not above that of the population as a whole. The figure below, however,  shows the stark vulnerability of all ages and particularly all males and middle aged men in particular. 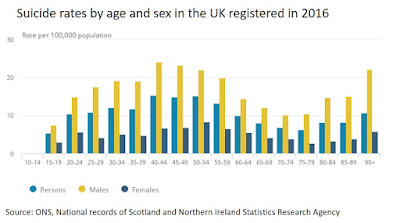 But there are also regional differences that may reflect economic factors such as the numbers on benefits. The socio economic factors and type of employment seem to play a key role in risk of suicide linked to mental health problems. A Government Briefing released in February 2018 [7] provides a valuable overview of the situation in England and Wales at least. The steep rise in suicides in Northern Ireland since 2004 appears to be caused by other historical factors that cannot be ignored also [8].

What is going wrong in  our Universities?

It is hard to come to terms with a suicide amongst students who should have all to live for in what should also be the best years of their lives. Equally, being amongst young people and teaching them year on year should be the best job in the world.

Are the pressures getting worse? It seems so. A report from the Institute of Public Policy Research in 2017 [9] concluded that: “Levels of mental illness, mental distress and low wellbeing among students in higher education in the UK are increasing, and are high relative to other sections of the population”. University managers have to somehow tackle this trend, get to the root causes and act decisively. Simply putting more pressure on its existing academic and support staff is no longer the solution; it exacerbates the problem instead. It merely compounds what is becoming a dangerous and unsafe environment to work in. The University of York produced a report in 2016 that brought together the many factors affecting students [10]. The knock on effects on staff seem less of a consideration. 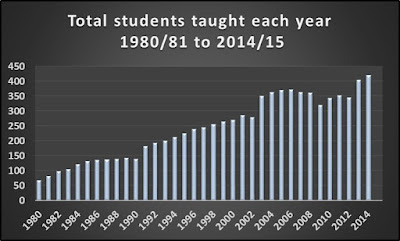 For me, the obvious change in Higher Education has been the inexorable rise in student numbers over many years. The figure shows the rise in the number of students I taught each year since 1980. This was accompanied by a reduction in staff teaching and increased pressures to ‘perform’ for REF. The challenge of supporting a substantial research team of post-docs, PhD students and technical staff throughout my time led to a regular 60 hour week rising to over 80 hours at extended busy times lasting months. Long holidays were non-existent as were weekends. In the early days, I could get to know students better and I am sure many problems were resolved in time. Then the numbers took over and overwhelmed what I could do for them as individuals. Referring them to student support, when more subject specific support was needed, seemed inadequate.

The increase in student numbers without a concomitant increase in staff resources has perhaps reached its inevitable limit. Students should expect more from their time at university. Those struggling to find the time to study should expect support to be readily available. This is best served closer to the point of contact with the staff actually teaching them. Centrally placed student support staff, or the trend toward using outside contracted support and help lines, is often not enough alone. Support staff at universities work hard but often cannot help with subject specific tensions or do not see the full picture. The solution lies with increasing contact time with staff in the area that they are studying. Also, more timetabled contact time with other students and group working tends to diffuse concerns as they seek to help each other. Many students feel lost in the large first year classes and should expect to be able to interact more often with staff and fellow students in timetabled work.

They all must be given equal chance to succeed in the best years of their lives taught by sufficient numbers of experienced staff doing the best job in the world.

If you are distressed then the BBC support site offers a comprehensive series of contact details for organisations such the Samaritans (Phone: 116 123 24 hours) and HOPELineUK that  offer support, practical advice and information to young people considering suicide and can also offer help and advice if you’re concerned about someone you know. Phone: 0800 068 41 41. In Northern Ireland there is Lifeline that provides support to people suffering distress or despair in Northern Ireland, regardless of age or district( Phone: 0808 808 8000 (24 hours a day). See: http://www.bbc.co.uk/programmes/articles/4WLs5NlwrySXJR2n8Snszdg/emotional-distress-information-and-support

Nightline has a searchable site that gives links to volunteers in your local area. See: https://www.nightline.ac.uk/want-to-talk/

[6] ONS. Total number of deaths by suicide or undetermined intent for Students aged 18 and above in England and Wales, 2014 https://www.ons.gov.uk/peoplepopulationandcommunity/healthandsocialcare/causesofdeath/adhocs/005732totalnumberofdeathsbysuicideorundeterminedintentforstudentsaged18andaboveinenglandandwales2014
[7] House of Commons briefing. Number CBP 08221, 5 February 2018 Suicide Prevention: Policy and Strategy. http://researchbriefings.files.parliament.uk/documents/CBP-8221/CBP-8221.pdf