Storm Clouds over University and College Union: It is consuming itself within sight of students 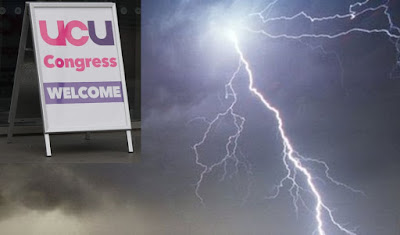 Students see a lecturer before them presenting knowledge, ideas and experience of practical skills. They do not see the contracts and pressures that exist.  They might ask more questions of the management about their lecturers and their precarious contracts.
UCU has squandered a chance to debate these real issues that affect themselves and the impact upon students.
This week saw an ominous storm break out at the University and College Union (UCU) annual Congress in Manchester.  Though students in both Further and Higher education do not ordinarily pay much attention to the proceedings of their lecturer’s union, they should look more closely now. The fate of the staff teaching them is determined to a large extent by the success of UCU in protecting jobs and working conditions. This is in the face of increasingly tough actions by the employers in both universities and colleges. Every student in Higher Education will have been aware of the recent and momentous battle to retain the defined pension scheme for their lecturers.  The employers sought to abolish a defined benefit pension to lower costs that are increasing year on year.  This has considerable consequences for staff in retirement after dedicating their lives to teaching in universities. The defence of this pension scheme shows the way for others and ultimately protects the futures of our students well into their futures. This is a long game strategy that will span generations. However, the success of the union in blocking this and securing a new review only came about after unprecedented strike action that was escalating. This alarmed the employers to the point of panic. Student support for their lecturers was critical in turning the tide.

The general secretary of UCU, Sally Hunt, fully endorsed the help that came  from students in her opening speech on Wednesday.  She applauded the solidarity shown by students and promised to support their ‘Give back our University ’campaigns with: “UCU will deliver on this pledge”.  Quoting the campaign slogan “Our working conditions are your learning conditions” had a genuine resonance amongst a packed hall of hundreds of delegates from across the UK.  The escalating horrors of thousands of Further Education staff losing their jobs, increasing workloads in both Higher and Further Education linked to equality issues, exploitative control by management and the inexorable rise in casual contracts for lecturers is clearly “bad for students too”.  The fate of their lecturers is intertwined with their own success and fate into the future.  Solidarity has a clear logic to it.
What could have gone wrong this week?

The problem is that a sizeable number of delegates arrived with the intention of ousting the general secretary and seizing control of how the executive of the union is run.  This action is unprecedented and comes after Sally Hunt has led the most successful industrial action in the history of the union. Indeed, one of the most successful in the recent history of the Trades Union movement and recognised by her recent election to the position of President of the TUC.  The whole of the congress has been impacted in this self destructive action.  The union appears to be consuming itself in front of the students that need a better education service.


A chance to forge better links with the student body at a critical time has been squandered by indulging in a process of infighting that will cause considerable reputational damage.
The problem for some members of Congress is that Sally Hunt endorsed a decision to ballot all UCU members with advice to accept the offer of the university employers to climb down and work with the union on an independent review of the pension scheme. This was the goal of the action at the outset. However, the momentum of the action led some to believe that strike action should escalate further and that UCU should seek more concessions.  But Sally Hunt’s considerable experience in leading the union over many years prevailed and the wider membership voted to cease their strike and regroup.  This seemed to infuriate some of the delegates. In putting forward motions critical of the executive staff, and in particular seeking Sally Hunt’s resignation, they triggered a storm. All UCU staff walked out and a dispute between UCU and their own union UNITE started (they cannot themselves be UCU members and run the UCU union). This led to chaotic scenes in congress and a suspension of the normal business.  It was clear that the delegates had divided into two very distinct camps. Those outside the hall supporting the executive and those inside seeking to seize control.

Why should this matter to students?

The simple fact is that the education that they receive is protected to a large extent by the efforts of UCU in challenging the employer’s actions. This has a long history and has resulted in recent years in a considerable moderation of the excesses planned by employers.  The rise in student numbers over the years should have triggered increases in staff numbers. Instead there has been a steady decline in permanent staff that have been replaced with staff on temporary contracts. UCU is still battling this trend and is currently redoubling its efforts.  It is tragic that news of these efforts has been drowned out by the headlines this week.  Fringe meetings on the ‘UCU Workload Campaign’ and ‘Building effective collective action on precarious work’  highlighted the challenge ahead.  These issues impact directly on the experience students can expect.
Employers rely upon the simple fact that students are generally transient in their institutions; staying no longer that three years in most cases. This means that they can be placated by management with no real intention of change.  Hitherto staff have been permanent and their concerns are not so easy to placate.  However, a transient population of  lecturers on temporary contracts means something different is possible for employers.  The  impact of the long term keepers of the system that protects students, the permanent lecturers, is dissipated.

It may have escaped the attention of many delegates that the congress dinner on Thursday evening was served mostly by students. One told me that they were all students and the man in charge of the service was also a student.  He was working full shifts in the run up to examinations next week because he "needed the money".  He had little time to revise. This is a real world problem for so many and UCU should start refocussing its attention in solidarity with those students needing help.

Students see a lecturer before them presenting knowledge, ideas and experience of practical skills. They do not see the precarious contracts and pressures that exist.  They might ask more questions of the management about their lecturers. Why do they see so little of the highly paid research staff that do little lecturing in universities?  What happened to the staff member that was so helpful last term but is gone the next term? Why are some teaching staff so busy that they have little time to help individual students?
These are the real world issues that UCU should be challenging, not its own hard working staff.

Education is the most powerful weapon which you can use to change the world. Nelson Mandela
Donald Trump