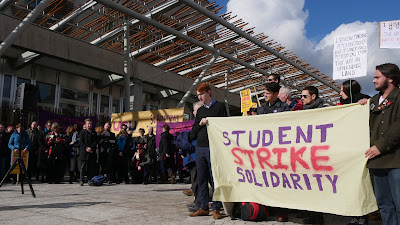 The announcement today is broadly welcome as a step in the right direction.

This afternoon, Shirley-Anne Sommerville, Scotland Minister for Further Education, Higher Education and Science finally presented a statement on ‘Student support’ to the Scottish Parliament. This was scheduled in at a late stage.

The full statement is here (15 minutes):

TEFS welcomed the independent report “A New Social Contract for Students - Fairness, Parity and Clarity” back in 2017 as a step in the right direction [2]. This is because it set out the basic needs of an individual student. That being at least £8,100 per year. It also made no distinction with regard to support for the individual between Higher and Further Education.

The statement today at least goes some way to acknowledging the recommendations. Increasing the minimum household income for bursary support is long overdue and will help many.  The full support for students with a care background is also welcome. But it is still likely to be the case that many of these people will never reach a university. It would be interesting to see some details of the overall cost it is expected to be.

The recommendation of the report that those in receipt of benefits should not lose out if transferring to full time education was kicked into the long grass and will be subject to further review.

The Minister stressed indicated that £8,100 per year that would be offered – as a bursary to students from a care background and a mixture of bursary and loan for others – on the basis of the living wage in Scotland.  The review last year calculated this on the basis of £8.45 per hour that was the figure in October 2017. Now it is £8.75 per hour and it seems that the Minister failed to recalculate.   There is an assumption in the original report that students will work up to 10 hours per week to make up a deficit. This was not indicated today but if the support remains static then only the number of hours worked can increase from 10 hours.

This might give some the impression that this statement was rushed out with reluctance. Questions that reminded them that the situation was still worse than when they formed the government stung somewhat.

This is very disappointing and it leaves room for backsliding next year.  It is the case that many students need more help now.  Indeed, it might not be too late for some students to contact their university to seek to defer their entry to next year to take advantage of a better situation then.  I hope those that do this are not disappointed ultimately.

[1] The independent report for the Scottish Government: “A New Social Contract for Students - Fairness, Parity and Clarity”
http://www.gov.scot/Resource/0052/00527875.pdf

[2] TEFS Blog Wednesday, 22 November 2017
Can Scotland afford to be brave with student support and fees?
https://studentequality.tefs.info/2017/11/can-scotland-afford-to-be-brave-with.html