The Betrayal of a Generation of Poorer Young People at University 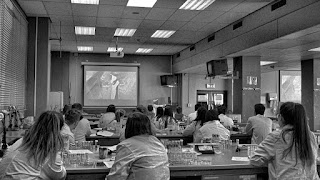 To Aspiration gap.................
However, it then goes onto describe its own ‘aspiration gap’ arising from its conclusions that prompts the statement:
“The First Minister should set higher education another challenge - to ensure that by 2030 students from SIMD20 areas not only have the same chance of securing places in higher education but also enjoy the same outcomes as students from the most privileged social backgrounds.”
The reference to “middle class” is provocative in suggesting that the solution is in generating “aspiration” and rectifying “perceptions of life-chance disparities” amongst disadvantage students. This in itself is a view from the ramparts of so called “middle class”.  It is not the solution.
The government might deploy the problem solving principle of Occam's razor; when presented with competing hypothetical answers to a problem, one should select the one that makes the fewest assumptions. In other words the simplest explanation is usually the correct one. Simply, students do less well when they are tired and spend less time studying and working on assignments. Any lecturer with experience in teaching and assessing students can tell you this. This may de due to a  variety of reasons. But it is certain that holding down a part-time job or commuting a great distance from home is the most likely cause amongst students from less well off families.
What is the nature of the evidence that leads to this so called ‘gap in aspiration’?
The paper brings together the current data of the Higher Education Statistics Agency (HESA) student data [3] and the Scottish Funding Council Report on Widening Access 2015-16 that emerged in September 2017. The latter is a valuable analysis that contains much more data regarding students from different backgrounds. All students are divided into groupings based upon where they come from and the Scottish Index of Multiple Deprivation (SIMD) [5] associated with that. The report concentrates on how students from the bottom 20% (SDIM20) compare with the rest. It presents data in % terms and only notes in a footnote that only 14% of students come from SIMD20 areas; thus hiding the real extent of the problem. It is acknowledged that this fails to account for the background of individual students and only considers which area they come from. However, SIMD is applied to relatively population groups of several hundred people and is relatively fine grained’ unlike the much larger sized POLAR [4] groupings of 5000 or more used in the rest of the UK. Recently moving from classifying individual students according to their socio-economic grouping to groups, based upon where they are from, to groups based upon address raises a suspicion that this leads to significant proportion of poorer families being hidden from the analysis and the problem being under-reported.